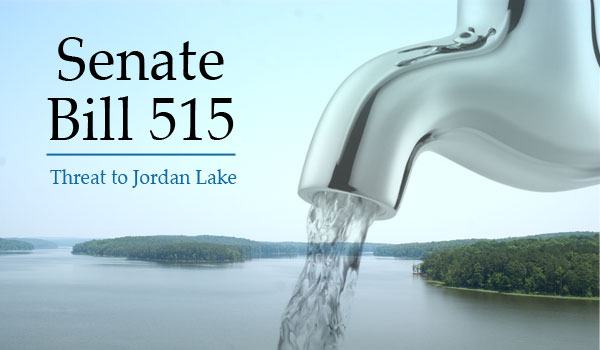 A large crowd filled the restaurant despite the short notice. A power-panel of area legislators expressed their concerns about this bill, which essentially voids all previously negotiated water quality guidelines for Jordan Lake that have been in work for the last 7 years.

S-515 passed quickly in the NC Senate, and has moved to a House committee before heading for a vote there.

Senator Barringer explained her surprise and the speed with which this new bill was passed in the Senate and her hopes that the bill will not move out of committee in the NC State House. The concern is that as the water regulations are repealed for Jordan Lake, there will be no regulations put in their place, only a promise of a committee to study the pollution and effects of run-off on the lake.

Read S-515 on NCGA.gov, the website of the North Carolina General Assembly.

The Importance of Jordan Lake

300,000 people in the Triangle draw their drinking water from Jordan Lake. The lake is a major area recreation facility with camp grounds, boating, fishing and two swimming beaches. It is a watershed for wildlife from largemouth bass to bald eagles.

Who benefits from this bill? That was the question on the minds of the audience. Cary, along with neighboring towns and area developers, has already been complying with water regulations that affect Jordan Lake. Some towns upstream from Western Wake are also moving to comply with proposed future regulations.

The fear is that if the current regulations are lifted, then anything in motion will stop. Without any regulations, towns that draw drinking water from the lake may bear the full cost of clean up that is caused by industry and runoff from upstream.

Liz Johnson, Mayor Pro-Tem of Morrisville said the one question she is asked about water is: “Is my water safe? Safe to drink? Safe to bathe? Safe to wash my clothes? We take those questions seriously”.

Not only is Jordan Lake an important drinking water source, but Senator Barringer also pointed out it is a major recreational attraction, and a driver of economic development.

Who Pays for Clean Up?

Barringer said that area legislators have crafted legislation that addresses Storm water run-off at the site, meaning where it occurs (be that an industrial park, retail establishment, homeowners subdivision etc.).

Barringer went on to say she is concerned that Senate bill 515 will put a burden on the communities that use the lake as their water supply with undue extra clean up necessary to have safe drinking water.

Fix It, Don’t Scrap It

NC Representative Tom Murry stated that if there is state-wide concern with the existing rules for Jordan Lake, that the State House should work on fixing those rules rather than what is currently proposed, a full repeal of those regulations.

Another concern of Barringer and other area legislators was the lack of notice before this bill came before the NC Senate floor for a vote.

Barringer described a race to block a bill that had been moved forward with only 36 hours to address concerns. She tried to gather a coalition to beat the bill, but lost that battle in the Senate.

Senator Barringer asked Representative Tom Murry to also block the bill in the House. Murry expressed confidence that the bill won’t move out of committee.

Dick Sears, Mayor of Holly Springs, put it this way:

” It (the bill) makes no sense. Although Holly Springs does not get its water from Jordan Lake… (Holly Springs) doesn’t want a cesspool in the middle of where we live.”

What You Can Do

If you are concerned about Jordan Lake and your water supply, write or email members of the NC House of Representatives and let them know your thoughts. Visit NC General Assembly: Who Represents Me.