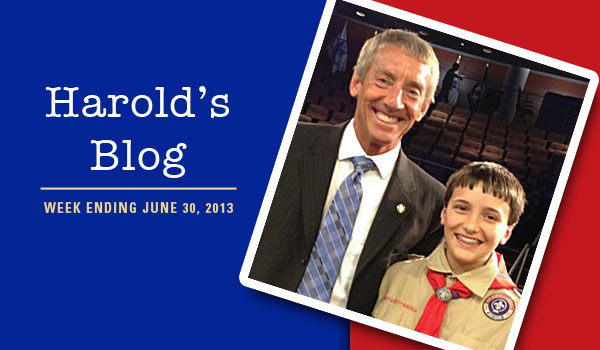 Cary, NC – This was a busy week in Cary that included a long budget related meeting and a regularly scheduled council meeting.

Monday I called council members to see if they had questions or concerns about the agenda for the regularly scheduled council meeting on Thursday. I presented their comments to management, directors, legal, and administration that afternoon in our agenda meeting. Based on the number of public hearings and information I received I predicted our council meeting would go to 10:30.

After the agenda meeting on Monday I met with the town attorney to get caught up on all legal matters. The town has prevailed in a number of legal matters lately and we are finally concluding issues that started years ago from other administrations.

Tuesday the council met in closed session to do employee evaluations of their three council employees: the town clerk, the town attorney, and the town manager. Each employee presented information on an evaluation form that was reviewed by council prior to this meeting. The council interviewed each employee and discussed issues related to their performance before deciding on raises.

Regarding raises, council again decided not to give themselves raises and did not discuss it. For a point of reference we were provided information on salaries for all council positions. I thought some of this information was interesting enough to share.

Similarly the chairman of the Wake County commissioners makes $23,300 and Durham county $24,271. I am not aware of the last time council gave themselves a raise in salary but there have been no raises in salary for council and mayor since I have been been in office.

Wednesday my only task was to tape the July version of Cary Matters. My co-host this month was Don Frantz who is always a lot of fun during the tapings. The July episode will be a departure from the norm in that instead of having a main topic we had six smaller topics.

Our topics included an update on the Imagine Cary process, a new proposal for an Immigration Customs Enforcement facility, the passing of one of our K-9 dogs, the downtown round-a-bouts, new fire stations, and the downtown fire sculpture. Our taping was done without any significant mistakes. The first take was used for all segments and the entire process took us about 20 minutes.

Thursday afternoon I met with a gentleman who wanted to volunteer and offer his expertise. We talked about several opportunities and he agreed to follow up if those did not work out.

Thursday night was the regularly scheduled council meeting. The highlight of the evening was the unanimous approval of the $307 million budget which begins on July 1st.

While being another very tough budget year we were able to appropriate funding to keep the highest services levels and move forward with several capital projects.

The only other item on the agenda that created a good amount of discussion was the ratification of an ordinance amendment approved at the last council meeting. The amendment would only allow strings or strands of non-blinking single-point white lights for landscaping in the town center and mixed use overlay zones. The minority votes felt that these types of lights should be allowed all over town. The council meeting ended shortly before 9:30.

In the news this week I learned of the passing of Ms. Ella Williams-Vinson. Ms. Williams-Vinson was a Cary native and lifelong resident who dedicated her life to teaching at Wake County public schools and preserving the history of the Cary African American community. She will be greatly missed by many in Cary.

In other news, ABC11 ran a story about someone in Durham who created a T Shirt that said “I’d rather be shot in Durham than die of boredom in Cary.” I was asked for my reaction to the shirt and I submitted the following:

“Both Durham and Cary are great communities with a lot going for them. Of course, I am partial to Cary where we are consistently recognized nationally as one of the safest, most desirable places to live, work, play, raise a family and run a business. I love Cary and am proud to be its mayor. I am sure my buddy Bill Bell feels the same about Durham.

Apparently the T Shirt makers have a false perception of Cary which is too bad. I would invite them to Cary to come and visit one of our sports venues, our amphitheater, our cultural arts center, or one of the many free outdoor performances that occur in downtown Cary, the Sertoma amphitheater, Waverly Place, and other locations. There is actually a lot going on it Cary so boredom would be a personal choice.”

ABC11 interviewed citizens in Durham and Cary. I am proud of the Cary citizens, interviewed in the story, which stood up for Cary. One citizen approached me Friday in a restaurant and said “I’d rather have a shot in Cary than be shot in Durham.” That was an interesting response. :-O

In emails this week I received concerns about the proposal at Evans Road and Cary Parkway, requests for more funding in our budget for non-profits, a request for a sidewalk, requests to take a road off the transportation plan, and a claim that the public has no confidence in their leaders because of the Imagine Cary planning process.

This week is a holiday week. Most of my appointments will be meetings with the exception of the July 4th celebration at the Booth Amphitheater. I hope everyone will join me at the amphitheater to celebrate our nation’s freedom.

Well that is all for this week. My next post will be on Sunday July 7th. Although I have Facebook and Twitter accounts those are not the best means of communications with me. Please send all Town of Cary questions or comments to Harold.Weinbrecht@townofcary.org and email personal comments to augustanat@mindspring.com.

July 4th in Cary and Beyond