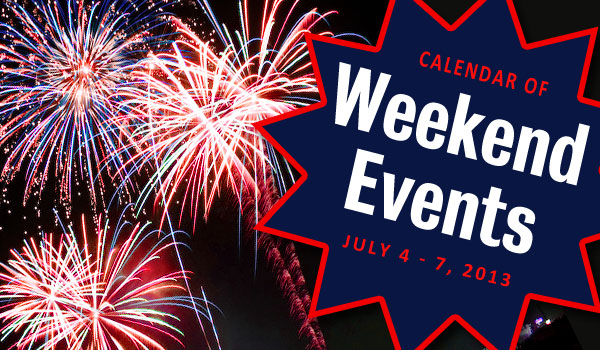 Cary, NC – It’s a lazy kind of mid-summer weekend in Cary, tagged onto the July 4th holiday. But still, this is Cary, with a handful of world-class events to keep those not otherwise occupied amused and entertained.

Technically, Thursday is part of the weekend, what with the national holiday and all. And most people get Friday off as well. So it’s a four day weekend!

Lots going on for July 4th, of course, right here in Cary and across the Triangle. Read all about it in July 4th in Cary and Beyond.

NC Symphony, Summerfest Finale – The season finale of the NC Symphony Summerfest at Booth Amphitheater comes to a close with a Classics Celebration. Some of music’s greatest works will explode from the stage, including Handel’s Music for the Royal Fireworks, the Hallelujah Chorus from Messiah, featuring the Concert Singers of Cary, and Tchaikovsky’s epic 1812 Overture. Gates open at 5pm, concert starts at 7:30pm. More info: Booth Amphitheatre.

RailHawks vs Puebla FC – Another finale, this is the last game of the spring season for the ‘Hawks, who return for the fall on August 3. However, this Saturday night, July 6, 2013, the RailHawks take on Puebla FC of Mexico’s Liga MX, the top futbol association south of the border. Expect a spirited, rowdy game and a crowd to match. Soccer at its finest, North American style, this weekend in Cary. Get tickets.

Harry Connick, Jr. – The master of suave, soulful jazz brings his golden voice and deft touch on the piano to Booth Amphitheatre on Tuesday, July 9, 2013. Get tickets.

At Booth Amphitheatre, Robert Plant is coming up on July 20. Hank Williams Jr is bring his band on August 30. Willie Nelson & Family rumbles into town on Saturday, September 14.

Over at Waverly Place, the Wind Down Wednesday Concert Series (which never makes it into Weekend in Cary stories) continues through August 21. It’s free, it’s fun, it’s on the Promenade at Waverly every Wednesday during the summer.

Cary Scavenger Hunt – Saturday, September 21, 2013. Get a team together and register.

Have a happy Independence Day weekend in Cary (or wherever you might be) from all of us at CaryCitizen. We’ll be back on Sunday, July 7 2013 with new stories including a history of Cary Academy, Tech Events in the Triangle, Harold’s Blog, pictures from July 4th at Koka Booth (can’t wait to see the ferris wheel) and more.

Gettysburg: Photos from the 150th Anniversary