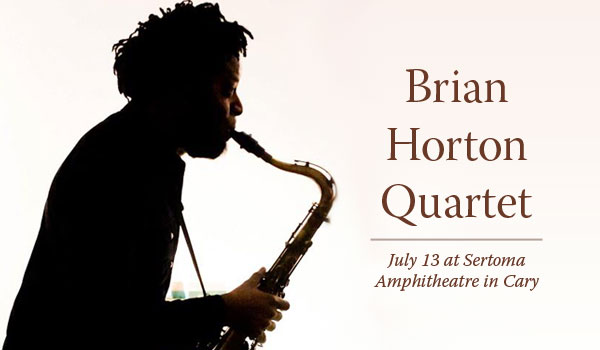 Voted “Best Jazz Band in the Triangle” by the Independent Weekly in 2010, Horton’s ensembles consistently rock the music scene with gritty originals and spontaneous live shows for changing times.

On Saturday, July 13, 2013, the Brian Horton Quartet will bring their energy to the Sertoma Amphitheater in Cary’s Bond Park for a free concert, open to the public. The rain site will be the Kiwanis Shelter in Bond Park. The concert will start at 6 p.m.

The musician is a child of the prolific jazz scene in Durham, centered around Grammy winner (and former Tonight Show band leader) Branford Marsalis.

As a composer and arranger, Horton’s music has been featured in several independent documentaries for Columbia and Stanford Universities, ESPN, FootLocker and by director Spike Lee.

Horton graduated from NCCU with a BA in jazz performance in the spring of 1997 under the direction of Dr. Ira Wiggins. He played lead alto in the award winning NCCU Jazz Ensemble and worked with the finest acts to come to town, including Ellis Marsalis, Alvin Batiste, and Steve Wilson. Horton shaped his sound out of the gospel and the blues, and during this time he performed regularly with the Orange Grove Youth Ensemble and at local churches.

He obtained his MA at the Aaron Copeland School of Music in Queens, New York under the direction of Jimmy Heath and the late Sir Roland Hanna.

The concert is made possible by PineCone in partnership with the Town of Cary.

The History of Cary Academy
Scroll to top