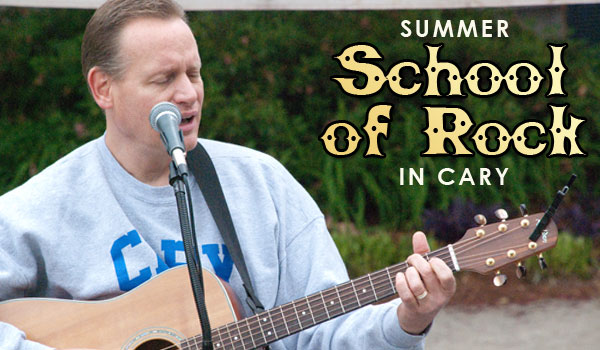 Cary, NC — What would happen if your elementary school music teacher held a summer School of Rock? That’s what kids in Cary are finding out this summer.

During the school year, students know Mr. Tom Teachout as their music teacher at Cary Elementary.

They may not know that he’s also a gigging musician who hosts an open mic night. This summer, he’s added a rock and roll camp to his repertoire.

In June, Teachout hosted his first summer school of rock camp. With 15 school-aged campers, many veterans of his music classes, Tom turned his Cary home into a full-fledged practice studio.

First to arrive was the equipment: a drumset, guitars, and a borrowed bass. Then came the noise. Imagine: 15 kids, drumsticks, and hundreds of watts of electric amplification. But Teachout says it was a ball.

“The smiles, the kids’ expressions, and how much fun they were having — it was great to see.”

Summer rock camp is an unique educational experience for young musicians, says Teachout. There is plenty of time for individual instruction on all of the different instruments, but he says what’s most valuable is the “band time.” At camp, students can form small groups of three or four and learn a song together — then come back to polish it up with Teachout.

Previously, Teachout had been teaching private lessons over the summers. But a flash of inspiration from his wife lead the two to organize the camp.

“You have all the tools you need to do this.”

Teachout says the two split management duties according to preference. His wife handles registration, logistics, and daily snacks. Teachout hunkers down in the basement with the kids, teaching guitar and directing bands.

Their son participates, too. Sometimes he’ll hop on the drum set and jam along.

The History of Cary Academy

Cary Scavenger Hunt: 10% Off in July
Scroll to top