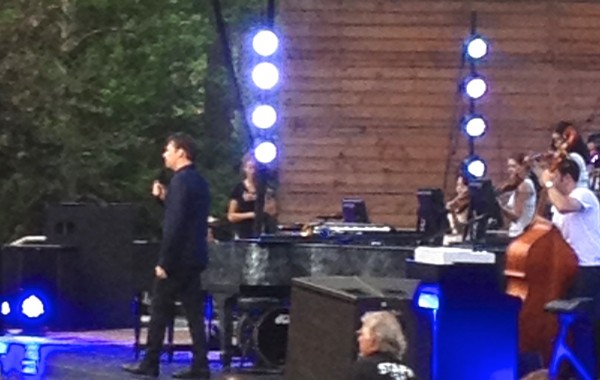 Cary, NC – It’s easy to be transported to another place and time with the soulful, toe-tapping, make- your-body-move music Harry Connick Jr. brings to the stage.

Even easier if you happen to be from Louisiana. Something about that City just cranks out musicians that know how to make you feel the music, not just hear it. I can’t think of a better place than Koka Booth Amphitheater in Cary to enjoy this type of concert. One thing I can say without hesitation, if you are expecting a mellow evening, think again. Harry Connick Jr. is a class act that will lure you into the world of Jazz and leave you wanting more.

My husband Dwight, also from Louisiana, and I headed out a little early to do a little tail- gating pre-concert. All essentials were packed including ponchos. There was a threat of rain but it seems the Jazz weather gods cleared the way and few clouds remained as the gates opened at 6:30.

As concert time officially arrived so did Harry Connick Jr. with a strut that is both confident and warm all at the same time. He had the crowd in his hands from the moment he greeted them with that New Orleans Southern voice and jumped right into his spunky rendition of Bourbon Street Parade. The audience was captivated and converted into jazz groupies instantly.

As he moved on to his next song, Tony Bennett’s On a Clear Day You can See Forever , the comedian in Harry came out. There were some late-comers in the preferred seating area and Harry decided to jest with said late-comers.

As he hit an instrumental part of the song he said to them “Come on in, Come on in…they took the seats, there ain’t nobody there” jokingly referring to the folks that were sitting in their reserved seats. Then addressing the folks in the seats “You all right, you all right”. This led to a series of additional comments that had the audience laughing hysterically, all the while maintaining the music playing and singing intermittently.

Connecting with the audience, and knowing how to make them laugh is something that obviously comes naturally to this performer.

Harry Connick and his impeccable band proceeded to offer a delicious musical menu for all to enjoy. Piano. Sax & Trumpet solos. Guitar. Violin. Drums. Ballads. Jazz. There was no shortage of music that made you want to dance, dance, dance. He also debuted two songs from his new album, Every Man Should Know:  I Love Her and Love My Life Away.

He closed the show with the perfect song for this Louisiana girl (and of course the 5000+ audience members in attendance): City Beneath The Sea, a song about the city of New Orleans. That’s the song that did me in and brought tears of joy as I reminisced about the city I grew up in. The powerful voice behind the words only added to the effect.

Thank you Harry for transporting us to our Louisiana roots on Tuesday night and sharing the musical beauty it has to offer!

Story and photo provided by Vanessa Mouton. Once a Cajun, always a Cajun!