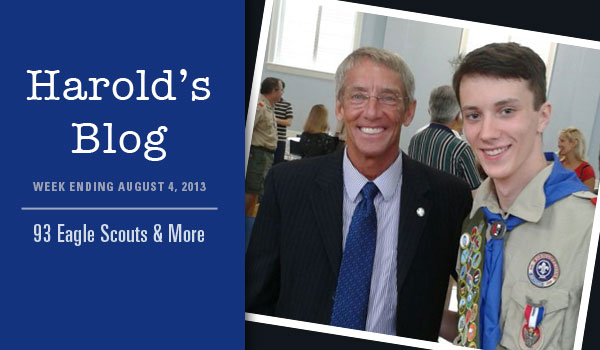 Cary, North Carolina — This was a slower week than normal which was a nice break.

Monday I met with the National American Miss North Carolina Junior Teen, Shivali Patel. She interviewed me about possible ways of volunteering within the town. We talked for about 15 minutes or so, I signed her journal, and then her father took pictures of us. I wish her much success not only in her pageant endeavors but in her volunteering.

Tuesday I had an interview with an auditor as part of the town’s normal auditing process. His questions revolved around the workings of the council, the competence and work of the staff, and if there were any indications of fraud. I was happy to report that we have a high functioning council with the best staff and no indications of fraud of any kind. Our meeting lasted less than thirty minutes.

Wednesday I was supposed to interview candidates for the Economic Development Committee since I am the liaison. But the committee only had one opening and that was a reappointment. Since council members unanimously recommended the reappointment I just contacted the individual via email and did not ask them to meet for an interview.

Interviewing for other boards and commissions are ongoing and are being performed by the associated council liaison.

Thursday I watched the Operations Committee meeting from the audience before the entire council went into closed session to discuss two items. One of the items is a potential major economic development project so keep your fingers crossed.

Saturday morning I had the pleasure of cutting the ribbon for the new Starpath Dance studio. They will focus on getting children started dancing at a younger age. This is important since childhood obesity has tripled in the last three decades, and one in every three children is overweight or obese. Add to that one in every three high school students get the recommended daily physical activity and you see why physical fitness for our kids is so important. Best of luck to the Starpath Dance Studio.

Later Saturday I attended the Eagle Scout ceremony for Ryan Chapman and Yacob Malik. These were the 91st and 93rd Eagle Scouts from Troop 216 at St. Michaels.

I congratulated them, challenged them to continue their service to the community, and read a proclamation recognizing their achievement. Cary is blessed to have so many Eagle Scouts.

This week I received a media request from News14 for me to comment on the Publix grocery store coming to Cary at Davis Drive and High House. I did not do an on camera interview but did provide this statement:

“Cary is glad to welcome a new corporate citizen to Cary and to North Carolina. I think Publix will serve the community well and I am confident that their products and services will match our citizen’s expectation of excellence.”

In emails from staff this week there was information about the expansion of the ICE (Immigration and Customs Enforcement) facility on Centrewest Drive in Cary. The existing site includes a 2-story 7,360 square foot building footprint (approximately 14,000 square feet of floor area).

The proposed site improvements include the addition of a sally port and a 1,000 square foot building expansion with additional parking.  The developer stated that it will most likely be early September before they submit a plan.

There was also an email about the upcoming grade separation project for Morrisville Parkway. Design plans for the project are nearly complete and the project will offer some significant safety benefits for pedestrians, bicycles, and vehicles.

The letting date for this project has slipped by about a month, but the new letting date will be November 19, 2013.  Morrisville Parkway will be closed to traffic for about 6-8 months, which was the least disruptive option.

Email reminders were also sent about Cary’s Hometown Spirit Award. If you know of someone that embodies that spirit please nominate them. Nominations will be taken until September 8th. More information is on-line athttp://www.townofcary.org/Departments/Town_Clerk_s_Office/Hometown_Spirit_Award.htm.

Now through August 31, the Town of Cary is seeking citizen input on how and where to invest pedestrian and bicycle funding from the 2012 Cary Community Investment Bonds via an online survey at www.townofcary.org.  The survey explores citizen sentiment on topics like bike route signage, bike/hike mobile apps, bicycle parking and facilities, and new sidewalks. The 2012 Community Investment Bonds for Transportation allocate $1 million for improving bicycle facilities and $750,000 for sidewalk improvements; the bonds were supported by 70% of voters. Survey results will be presented at a Cary Town Council meeting later this fall and be used to develop the project investment list.

This week’s calendar has a regularly scheduled council meeting and associated agenda meeting.

Well that is all for now. My next post will be on Sunday August 11th. Although I have Facebook and Twitter accounts those are not the best means of communications with me. Please send all Town of Cary questions or comments to Harold.Weinbrecht@townofcary.org and email personal comments to augustanat@mindspring.com.

CaryCitizen was closed for vacation last week and did not get to publish Harold’s Blog. Harold is a very punctual blogger. If you’d like to read his post from last week, visit HaroldWeinbrecht.com.