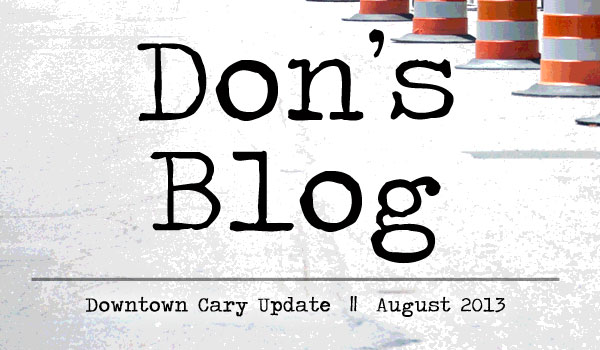 Cary, NC — Downtown Cary Update from the blog of Councilmember Don Frantz, including news of the Fire Sculpture and the Downtown Park.

I’m sorry that it’s been a while since I last posted on my blog. Life has been incredibly busy and what little free time I have had, I preferred to spend with family – not the internet.

I swear that some days going “off the grid” gets more and more appealing. I often joke with fellow councilmember and technology buff, Lori Bush about this – how all this technology that is supposed to make life easier seems to take so much of my time.

Possibly by the time this blog post is published the “Meeting Place” fire sculpture will have been relocated to its new home at the old water tower site across from Cary Elementary School – assuming it makes it there in one piece.

The council voted to move the “piece” after staff located a contractor confident that they could accomplish the task.

There has been a lot of community angst about this project and I want to set the record straight.

Yes, the town did spend $40,000 on it. But to be fair, the $40,000 cost of the “art” included the weeklong construction and ultimate firing of the sculpture on site which was a wonderful community event in which hundreds participated. However, that event ended months ago and we found ourselves left with a “permanent” sculpture that is entirely out of place at its current location.

A) demolish it
B) leave it alone
C) move it

I chose A. Unfortunately I couldn’t count to four. The next best option then was C as I was not about to allow the “piece” to remain at its current location – the future site of the town square component of our soon to be constructed downtown park btw. We could move it now or move it later – either way it’s got to go – the sooner the better as far as I was concerned.

It’s no secret I dislike the “piece”. Just because an “artist” made it doesn’t make it art. After hearing from the community it’s clear that the majority of you dislike it as well.

The cost to relocate the “sculpture” is about $25,000. Totally outrageous I know. However, after witnessing the process and construction required to prepare it for moving, I can’t argue that isn’t a fair price – they have been working on it for two weeks now. The Raleigh Arts Council provided a grant to cover about ½ the cost of the move.

This was a lose-lose. Had we voted to demolish it, the “arts crowd” would have been furious…well, more furious than they are that we decided to move it (I mean how dare we?). Had we left it alone, then the majority of our citizens would have been angry, and by moving it folks are angry that we are spending another dime on it.

The ONE bright spot – if there is one – throughout this whole ordeal is that I am positive that the council learned something. There will be increased scrutiny over future art projects from here on out I promise you. And while I cannot speak for everyone on the council, this boondoggle definitely impacted my recommendations for the town’s public art advisory board. I only recommended those applicants who are NOT artists or involved in the arts community. This board desperately needs more members who are representative of the majority of Cary citizens – not the arts community.

And speaking of the downtown park,

The downtown park discussion is over! We are now working on engineering and construction plans. I am very pleased to report that the council ultimately supported a concept very similar to the one adopted in 2009 that provides at least seven acres of parkland and relocates the future downtown Cary library onto the park site.

There will also be trails, a water feature, the town square, an outdoor amphitheater area and even a little room for limited private development. Should no private development occur, well, the parkland just gets bigger and that’s ok with me.

Town staff will now be preparing a range of phasing and funding options for council to consider soon. 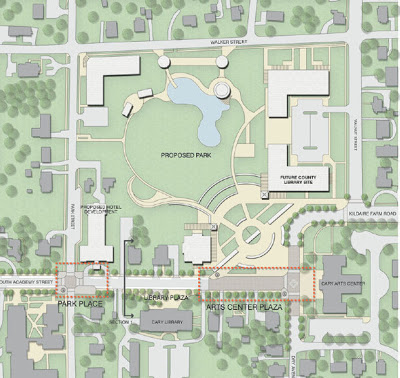 At our last meeting the council unanimously approved a lease agreement for the historic Jones House on the corner of Academy and Dry. Jim Pellegrini of Muddy Dog Coffee Roasting fame and Tammy Callaway-Harper of SweetT, a bakery will join forces to open a café with approximately 50 seats in the historic home. The town will invest approximately $250,000 in the home’s restoration and up-fitting for the business. The lease is for five years with an option to renew for another five. After the first five years the town will recoup about $131,000 of our investment. This is an incredible opportunity to restore and repurpose one of Cary’s great historic structures.

Another thing that has been great to see is the investment a large number of property owners and homeowners are making throughout downtown as a result of the town’s investments. If you aren’t familiar with what I am talking about take a few minutes and drive through some of our downtown neighborhoods – you’ll see what I mean.

For years the town only talked downtown investment – lots of plans but no action. Since 2007 however, that has changed. Our commitment to downtown has earned us the trust of the surrounding communities. Property owners downtown are now becoming increasingly comfortable investing in their properties and it shows.

But make no mistake – we still have a long ways to go. Downtown revitalizations are often referred to as a “20 year overnight success”. I feel like we’re in year five or six.

You may or may not agree with all our decisions downtown and that is fine. Heck, even I’m not proud of everything we’ve done. Take the “The Cary” movie theater project budget snafu for example – what started out as a $3 million dollar project has ballooned into $6 million. Had the council known the project’s full cost on the front end we might not have approved it. But as Jack Smith put it, “how do you get the toothpaste back in the tube?” The theater project was well underway once we learned of the cost discrepancies. So, at the end of the day what this means is $3 million less for other downtown initiatives. We also learned how this happened and can assure you something like this will not happen again. But on the good news side the Cary Arts Center came in a $3 million under budget so I’m very proud of that.

Well that’s about it for now. I’ll try to post again soon but no promises. As always, thanks for reading!