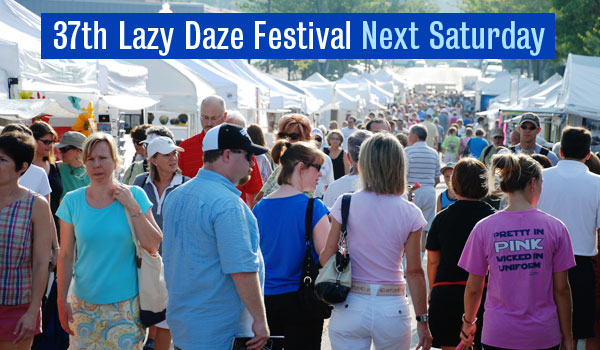 Festival Director Joy Ennis says they have had record 102 degree days and a record low of 74 last year, and everything in between. Maybe it’s just me, but I always remember sweating bullets at Lazy Daze, the premier arts & crafts festival of the Southeast. If temps continue as they have last week, Cary should experience a record turn out to enjoy over 380 artists displaying and selling their wares.

For the 37th annual festival, the town has brought back the hunt for “Little Jerry” dolls in honor of festival founder Jerry Miller. Try to find five of the dolls made to resemble the drawing of a guy sleeping under a tree originally drawn by Jerry Miller that continues to be the official Lazy Daze logo. This idea was started 2 years ago and has proved to be a wonderful distraction for families.

The festival starts at9am – but artists will be set up well before that, and veteran Cary-ites know you can shop earlier to beat the crowds. Artists booths will line both sides of South Academy Street and along East and West Chatham for a block on either side of Academy.  Lazy Daze 2013 Map

Back By Popular Demand

The day gets off to a rousing start with the return of our sister city’s Town Crier, John Webster, who will ring in the festival at 9am with a grand opening proclamation. Webster and his wife, Mary, visit each year from Markham, Ontario, Canada, as part of Cary’s Sister City program.

The chainsaw wood carving area “Timber!”, sponsored by our friends at Cary Magazine, will showcase 3 different artists creating pieces all day during the festival. Root or your favorite and a prize will be awarded at the end of the day. This booth will be located across the street from the Cary Public Library.

Artist demonstrations will be ongoing inside the Cary Arts Center. Five different artist’s guilds will be available for visitors to watch in action including: Cary Clay Cooperative, Embroidery Guild, Raleigh Leatherworks Guild, Cary Photographic Artists and the NC Gourd Society.

There are three areas to see live entertainment ranging from local musical groups to magic shows. One stage is set up in front of Fidelity Bank, on the corner of Academy and Chatham – that’s where the day starts with the proclaimation and then musical acts follow throughout the day. A second stage is on Dry Avenue in front of the Cary Arts Center, starting with musical theater, musical groups and some stage performances. The ever popular Kids World is set up at Park and Academy (where the Downtown Cary Farmer’s Market usually is on Saturdays) and there you will find magic shows, story telling, clown camp kids and “Professor “WhizzPop”.  Roving performances include the return of the Silver Drummer Girl (a little creepy if you ask me), and other interactive performers who will be walking around the festival engaging the audience.

Parking problems and traffic issues are to be expected- as the streets around the festival will be closed to cars. Park further out, try to find a space at the Town Hall parking deck, or be smart and park at Cary Town Center behind Sears and take one of the free shuttles that leave every 15 minutes. These drop you off at Cary Elementary School beside the Arts Center. For those that want to try something different, C-Tran is free for the day as well.