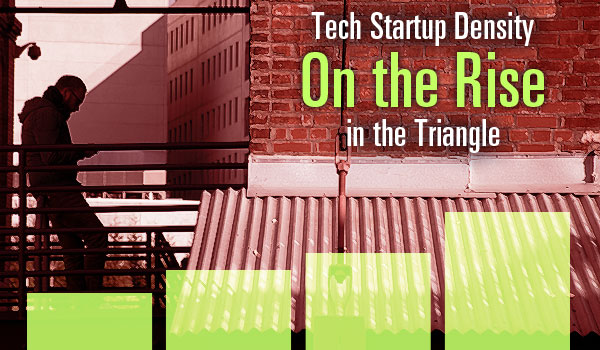 Cary, NC – Tech startup density is on the rise in the Triangle, according to a new report by Engine. That’s good news for local business.

Engine in collaboration with the Kauffman Foundation has just released a report on Tech startups: “Tech Starts: High-Technology Business Formation and Job Creation in the United States“.

The report specifically examines the impact of new, high-tech startups on job creation, finding that high-tech startup formations are way up, and that these firms create jobs at twice the rate of other young private sector firms.

The report looks at both the high-tech sector and the information and communications technology (ICT) segment of high-tech and their important contributions to entrepreneurship in the U.S. economy.

* Density values of one (1) indicate that a region has the same density of startups as does the United States as a whole. Density measures greater than one indicate above average densities. Metro startup density peaks around 3 (with Boulder, CO as an outlier at 6+). Startup density determined by comparing 384 metropolitan areas in the United States in 2010.

The Triangle has a Bright Future

The Triangle has a developing entrepreneurial community anchored by Research Triangle Park, fueled by our 3 major university centers (NCSU, Duke, UNC-CH), housed in our exploding incubators and accelerators (American Underground, HQ Raleigh, First Flight Venture, etc.) and supported by our great quality of life. Our Tech startup density is increasing rapidly; where it stops, no one knows!

Read the report for all the details.