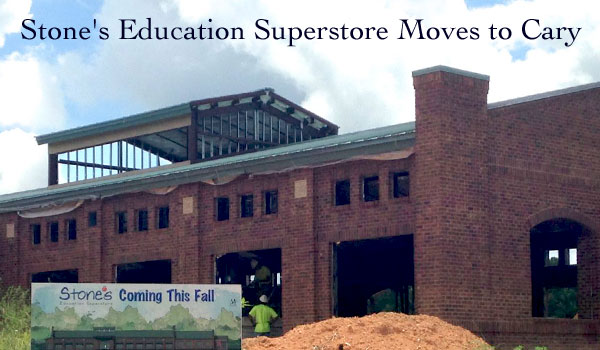 Cary, NC- Cary is known as a family-friendly town and that is precisely why Stone’s Education Superstore is relocating their successful school supply business to the corner of Trinity Road and NC-54 this fall.

David Madison, and his wife Carol, purchased the Stone School Supply Store eight years ago because they have a passion for education and saw huge upside potential in a store that could serve the needs, not just of teachers, but of anyone involved in educating children. Parents, daycares, after school programs, home schoolers, scout troops and camps can find what they need in the store’s large selection.

I asked what ages the store serves, and David replied that they primarily see folks come in for pre-school and elementary aged needs. However, there are tools for middle schoolers and high school, even AP needs.

And, interestingly. he explained that assisted living and rehab centers can also find their needs filled when they look to occupational therapies similar to what parents may teach toddlers such as lacing skills. 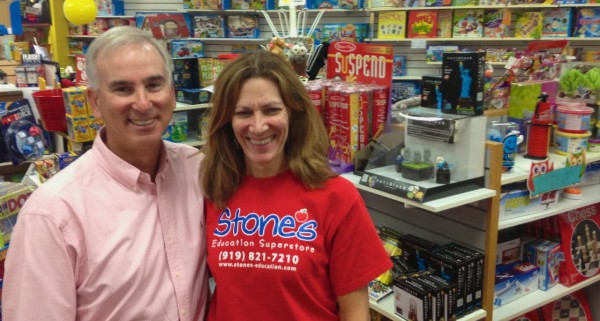 Shop Where the Teachers Shop

The business has been in its current location in Raleigh (on Tryon Road near Gorman Street) since the 1970’s. Its 16,000 square feet of selling space were bustling in late August with folks coming in to outfit classrooms, purchasing PE equipment, whiteboards, construction paper, workbooks and more.

Stone’s was founded by the Stone family back in the 30’s and 40’s and has steadily grown with the Triangle. But David and his wife have a vision to be more than just a school supply company. They want their new location to be a community go-to resource. Their tag line is “Shop Where the Teachers Shop” and they aren’t kidding.

Even in their current location, they are a destination for folks who come from as far away as South Carolina and Asheville. David’s customer analysis placed their future location in Cary at the epicenter of their customer base. Folks will be able to access the store in East Cary form I-40, US 1, NC 54, and from I-540.

David explained how he chose the new location saying that it was actually 2 properties of 3-1/2 acres that were purchased together. He and his wife worked closely with the Town to ensure that they made it through the planning process. He told CaryCitizen that he approached Erv Portman, Jennifer Robinson and Don Frantz who all expressed enthusiasm for a retail location that would become a great Cary destination close to downtown.

If all goes according to current plans, Stone’s Education Superstore should be open for business in Cary around Thanksgiving. And, so far, construction has gone on schedule. Most items will be shipped and set up directly in the new location, and much of the current inventory on Tryon will be sold off rather than moved. Stone’s lease in their current location runs through the end of 2013, making for perfect timing on the move.

When David describes the new location, he glows with pride over a building that he has been involved designing for 2 years. He wanted to evoke the traditional solidity of an old train station and the exterior is all brick with large windows allowing for an open and light-filled interior.

Although they did not apply for LEED certification, the store incorporates many “green” elements, including: solar panel array on the roof, Cree energy-efficient lighting, use of solar LED lights in the parking lot, a large paddle fan to reduce the air conditioning usage, and 2 car charging stations will be located in the parking lot. If visitors are interested in how the building is doing with their solar energy generation, a screen will be set up to monitor solar energy output and usage. Customers may even be able to check online for added educational fun.

The Stone’s team is excited about the move. Watch for this new addition to the business landscape not far from Cary’s downtown.

Education coverage on CaryCitizen is sponsored in part by Hopewell Academy in Cary, serving grades 5 – 12.