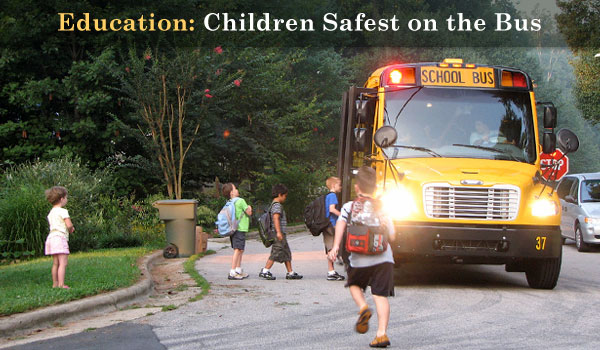 Cary, NC – Here’s an interesting fact: “School buses are nearly eight times safer than passenger vehicles”. And yet less than half of all school aged children ride the buses in Wake County. Of the 153,000 school kids registered this year, only 75,000 will ride our buses. No wonder this area can’t get behind public mass transit!

Somewhere along the way, parents have been led to believe that driving their kids to school each morning either is a safer bet, or saves them time. Two fallacies, after you watch parents driving while texting and talking on the phone, and passing stopped school buses in the mornings.

While carpooling is a common practice in many communities, a school bus is the safest way for children to get to school. School buses serve children daily in nearly every community, and fatal crashes involving school bus occupants are extremely rare events.

Now is a great time to remind your children of safe practices when boarding and exiting the school bus and a good time to refresh yourself.

“Remind your children about the 10-foot danger zone around the school bus where the driver can’t see them,” says Debbie Newman, Safe Kids Wake County coordinator. “To be sure the bus driver can see them – young children should take at least five giant steps away from the bus while entering or exiting the bus. Older kids who must cross the street should look at the bus driver for an ‘OK’ sign before crossing in front of the bus.”

By Far The Safest Way To Travel

“School buses are, by far, the safest way for kids of all ages to get to and from school,” adds Debbie Newman. “It would be ideal if children did not have to cross a busy street unattended to get to their bus stop. However, regardless of their bus stop location, all kids should stand on the grass or sidewalk while waiting for the bus. Kids should not move toward the bus until the driver has opened the door of the bus and signaled it is okay to enter.”

Motorists Need to Be Aware

In North Carolina it is against the law to pass a stopped school bus, and motorists should never pass a school bus with its lights flashing.

Education coverage on CaryCitizen is sponsored in part by Hopewell Academy in Cary, serving grades 5 – 12.

Editor’s Journal: Downtown Before the Flood

Youth Basketball Just Got Even Less Expensive
Scroll to top