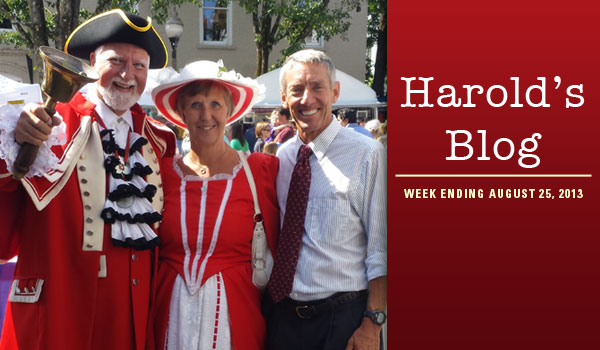 Cary, NC — This was a very long week for me with early mornings and late nights.

Singing on the Radio

Monday started with a 7 AM event at WRAL FM. I sang karaoke on the radio for the Backpack Buddies charity which will provide food for underprivileged kids on the weekends. While singing a song on the radio was one of the most humiliating moments of my life, it was for a good cause and I actually had a lot of fun. Mike, Lynda, and Vanna were a LOT of fun and I had a great time.

Lunch with the Governor

Later that morning I met a celebrity at the Umstead hotel and rode with them to the airport to pick up others. We then headed to the Governor’s mansion to have lunch with the Governor and the Secretary of Commerce to discuss a potential economic development opportunity. It was a treat to have lunch in the mansion and have the Governor give us a little tour.

Monday afternoon I called council members for the concerns and questions about the agenda for Thursday’s. There were not many concerns and only a couple of questions about a proposal that is coming back to council. Later in the day I met with management, directors, legal, administration, and the Mayor Pro-Tem to go over the agenda. The agenda seemed straight forward so there wasn’t a lot of discussion. I predicted that our meeting Thursday would last until around 9:30 due to the quasi-judicial hearing.

Monday evening I attended a reception being given by the Chamber of Commerce to recruit a new business interest to town. I left the reception somewhere around 9 PM.

Tuesday started with a working breakfast to discuss details of a potential economic development opportunity. I am proud that Cary has positioned itself to be an attractive place not only to residents but to businesses too.

Tuesday evening the council held a work session. The first topic of the work session was the appointments for the town’s boards and commissions. All recommendations from the liaisons were appointed. To see the list of appointments go tohttp://www.townofcary.org/Town_Council/Agendas___Minutes/Staff_Reports/TC14-02.htm.

Changes to APF – Goodbye to Payment in Lieu

Next we went into closed session to hear advice from the attorney before making changes to the transportation system requirements. Then we came into open session to discuss and set direction for changes in the transportation system requirements. The reason we are making these changes is because of changes in the legal system. Those changes caused us to eliminate the APF (Adequate Public Facilities Ordinance) requirements last year and put an interim process in place.

The goals of a permanent change were to create requirements on a solid legal foundation and create something that was flexible, logical, balanced, and simple. And to assure that the total amount of private contribution to the transportation system improvements were proportionate to the impacts reasonably expected to be generated. As a result we agreed on the following changes:

The next steps include a staff report to the council’s Planning and Development Committee. This will be followed by a Transportation Development Fee study to determine where the fees should be set. Of course there will be public hearings for ordinance changes and other changes as we move forward.

After our session on the transportation system requirements we went into closed session to meet with a member of our staff. We then came back in open session to adjourn around 9 PM.

On Wednesday I attended a meeting of CAMPO (Capital Area Metropolitan Planning Organization). All CAMPO staff recommendations on the agenda were approved. These included:

In addition CAMPO created a subcommittee to review replacement candidates for retiring Director Ed Johnson. Our meeting finished in about an hour.

Afterwards I attended Wind Down Wednesday at Waverly Place. I was able to talk with at least a dozen current and potential business owners and entrepreneurs about having their business in Cary. I was at this event for about two hours.

Thursday started with an interview by a scout earning his community service badge. We discussed the pros and cons of the potential fare increase for Cary’s transit system CTran. Our interview only lasted a few minutes.

Thursday night the council held its second regularly scheduled council meeting of the month. The meeting was kicked off by the town crier, John Webster, who is also the town crier of our sister city in Markham, Canada. There were four public hearings which only drew a few comments. This was followed by a quasi-judicial hearing which eventually led to the approval of a new Verizon Store at the corner of Walnut Street and Meeting Street. The council also approved the Lewter Shop Road development in Chatham County. This proposal was previously tabled and came back to us with the developer volunteering to do all staff suggested road improvements. Additionally, the council approved Land Development Ordinance Amendments and the Veterans Freedom Park. The Veterans Freedom Park is on 12 ½ acres at the corner of Harrison Avenue and Cary Parkway and will have a 90 foot spire. The council meeting ended after a work session at a little before 10 PM.

Saturday I opened up the 37th Lazy Daze arts and crafts festival. Preceding my comments was the town crier John Webster and bands from Cary High and Green Hope High. The festival began at 9 AM and the weather was perfect. Large crowds attended the festival all during the day and may have broken a record for attendance. We will have to wait and see.

In emails this week it was announced that Google designated Cary as North Carolina’s 2013 eCity (the big announcement I talked about last week). The eCity Awards recognizes the strongest online business community in each state – the new digital capitals of America. The businesses in these communities are embracing the web to find new customers, connect with existing clients and fuel their local economies. Cary joins the ranks of America’s leading cities in the digital economy.

This week will be a slow week as I celebrate my wife’s birthday and enter into a holiday weekend.

Well that is all for this week. My next post will be on Sunday September 1st. Although I have Facebook and Twitter accounts those are not the best means of communications with me. Please send all Town of Cary questions or comments to Harold.Weinbrecht@townofcary.org and email personal comments to augustanat@mindspring.com.