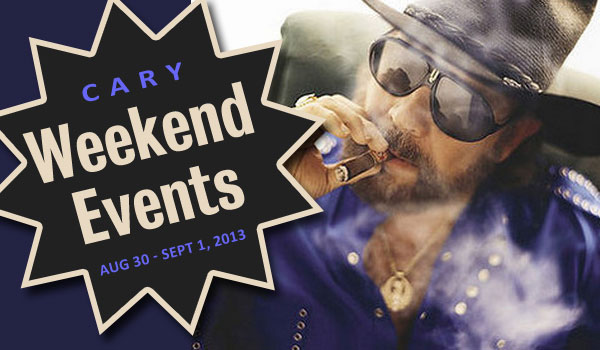 Cary, NC – Labor Day Weekend is upon us – where did the summer go? Fortunately, there’s one last fling before the serious business of fall gets under way.

Maybe you have plans for some grilling and chilling, a last dash to the beach or a few rounds of golf. Labor Day weekend is a laid-back holiday.

But that doesn’t mean we roll up the sidewalks here in Cary. Au contraire, mon frere.

The big event of Labor Day Weekend 2013 in Cary is the appearance of Hank Williams Jr. at Koka Booth Amphitheatre in Cary.

Hank Jr is known for his country music, he affinity for NASCAR and his Monday Night Football song for the NFL. But he’s also known as the son of Country’s most famous son, Hank Williams, Sr.

Junior has his own story, and it’s pretty interesting.

His famous father died when he was just 3 years old and Hank Jr. was pushed onto the stage at an early age. When he was 11, Junior made his Grand Ole Opry debut in Nashville.

Williams literally lived out his childhood on the road as a touring musician. He learned banjo from Earl Scruggs and piano from Jerry Lee Lewis. At 15, he was a star. At 23, he attempted suicide and had a nearly fatal fall from Ajax Mountain in Montana.

But Hank Williams Jr. found himself at the bottom of his troubles, and came back with a new, original sound. He was still the son of his father, but no longer the living incarnation. He was his own man.

Junior plays his own brand of Country with strong rock and blues influences. It’s more Marshall Tucker than Taylor Swift. But like all great country artists, the message is clear – life ain’t perfect, but let’s have a good time anyway.

And you will have a good time this Labor Day Weekend with Hank Williams, Jr. at Booth Amphitheatre in Cary. Get some tickets now, y’all.

Check the Calendar for more weekend events and have a happy, safe holiday from all of us at CaryCitizen!