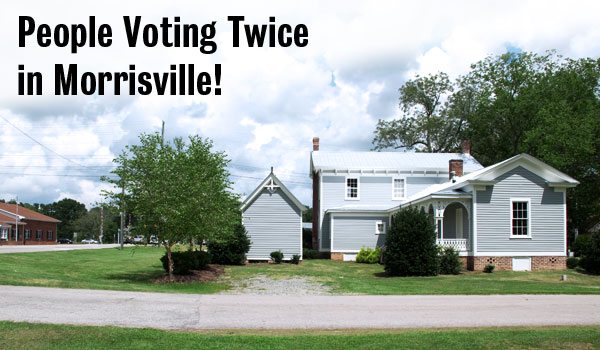 Morrisville, NC — It’s true, people are voting twice in Morrisville. At least, they should.

U.S. citizens living in Morrisville must vote on two different days this fall:

Here’s the thing: residents of Morrisville MUST vote on two occasions to register their choices on the bond issue, Board of Ed elections and candidates for town office.

Incidentally, the State of Oregon votes exclusively by mail.

“Oregon elections are conducted by mail. The use of vote-by-mail was first approved on a limited basis by the Legislature in 1981 and was made a permanent feature of some elections in 1987. On November 7, 2000, Oregon became the first all vote-by -mail state after being adopted by nearly 70% of the voters in 1998.” – OregonVotes.org

Voters in Morrisville will decide the following slate of candidates:

Wake County Board of Education, District 7

Election coverage on CaryCitizen is sponsored in part by Hopewell Academy in Cary, serving grades 5 – 12.

Harold’s Blog: Thinking About the 2015 Budget

Saddle Up for Cary’s Re-Use Rodeo
Scroll to top