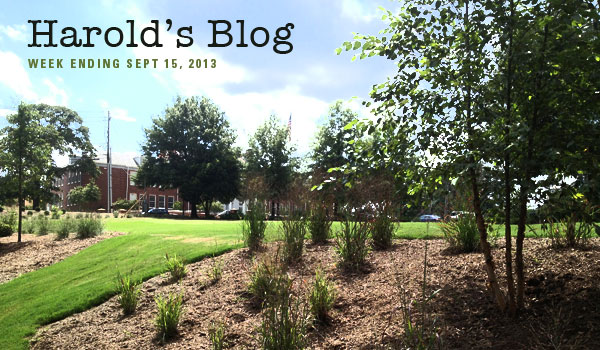 Cary, NC – This week was a busier week that included a lot of late nights. The highlights of the week were a mini retreat and the council meeting.

I started Monday with phone calls to council members to hear concerns or questions they had about the agenda for Thursday’s regularly scheduled council meeting. Later in the day I met with management, directors, administration, and public information to review the items on the agenda.

There were several items related to the Mayton Inn, three public hearings, a quasi-judicial hearing, and a decision on the new fire station architectural concept.

Since there were very few questions from council members and staff, I predicted the meeting would end around 9:30.

Tuesday – Thinking About the 2015 Budget

Tuesday the council held their first ever mini-retreat at the beginning of the budget cycle. The purpose of this retreat was to get a good understanding of budget needs and to discuss council priorities. Council, management, and department directors met at the retreat from 3:00 PM until about 7:30 PM.

The town’s fiscal year goes from July 1st to June 30th. This fiscal year the town is focusing on the following initiatives:

The first topic of the mini council-staff retreat was the current vision, mission, principles, focus areas, goals, practices and initiatives. All agreed on these values.

The second topic was on the town’s aging infrastructure. Some takeaways from the presentation and discussion included:

The next topic was council initiatives to be considered for next fiscal year’s budget. Some of the thoughts stated for further consideration included:

The final part of the mini retreat was a discussion on the town’s fund balance. It is important to know that the state requires two months of the operating budget to be held in reserves. Cary has four additional months being held in reserves bringing our total reserves to over six months. Why do we have the extra reserves? To make sure we can handle catastrophic events and to present a strong financial position to the bond rating agencies. BTW, we are one of the few municipalities in North Carolina that has the highest rating (AAA) from all agencies. Having a AAA rating means that we get the lowest interest rates on our debt which means our taxpayers save million.

Why are we considering a change in our reserve policy? Staff has pointed out that interest rates are earning almost nothing. All municipalities with the highest ratings from all agencies have less in reserves than we do. In addition, almost all catastrophic events are covered by insurance. So that brings up the question of whether those taxpayer dollars could be made available for something else. That is, should we pay down debt, should we use cash instead of debt for some capital projects, or should we make some of the reserves available for a major economic development opportunity? Based on this information and questions staff decided it would be good for the council to review its policy of having four extra months of reserves. They recommend moving to three extra months of reserves instead of four. Their presentation was based on this recommendation.

Staff presented information used by bond rating agencies to determine whether a general fund balance is strong. For example, out of all the cities with the highest ratings Cary had the highest per capita income at over $40,000 annually, the lowest poverty rate (at about 3%), the lowest unemployment rate (less than 6%), and the lowest tax rate at 35 cents. Our debt per capita and debt service versus operating expenses is the second lowest. Our total General Fund balance is the highest and our available reserves (greater than two required months) are the highest. BTW, the only other cities with the highest ratings from all bond rating agencies in North Carolina were Charlotte, Durham, Greensboro, Raleigh, and Winston-Salem.

Wednesday – Going to the Dogs

Wednesday I attended the one year anniversary of Wags4Tags. This is an organization that unites our psychologically and emotionally impaired Veterans across North Carolina with trained Companion, Emotional Support and Dogs rescued from kill shelters so that the two can heal in unconditional love, trust and loyalty.

And after one year of service they are making a big difference. My role at this event was to talk about the impact they are having in Cary and surrounding communities. To find out more about Wags4Tags and how you can help them please visit http://www.wags4tags.org/.

A new partnership was announced at this event. Wags4Tags is working with Dognition to find dogs suitable for service. Dognition helps owners understand their dogs in an online canine personality questionnaire which is completed by playing science-based games with the dog and a friend. This information helps understand how dogs see the world. And by profiling great service dogs they can find out which dogs would be suitable in that role. Or if you just want to find out more about your dog (smart or not so smart) it will help with that too. To find out more about Dognition see https://www.dognition.com/.

Checking in with Town Attorney

Thursday started with a regularly scheduled meeting with the town attorney. We meet periodically to go over current legal issues and potential legal issues and to address any concerns I, or other council members, may have.

I believe our legal department is doing a good job especially since the legislature and courts are frequently changing our authority to govern the town. Our meeting lasted less than half an hour.

Before Thursday’s council meeting I met with representatives from the Sepal Group, working with World Wide Apparel Resources. Their mission is to build modern, efficient, and safe garment factories in Bangladesh. In case you don’t know Bangladesh creates huge amounts of the garments we wear. Unfortunately, their fire codes are so weak that fire disasters are a common occurrence.

Cary’s Senior Fire Code Official, Don Ayscue, has made it is personal mission to help. He spends his vacation time and spare time in Bangladesh helping make sure these factories are built and operated in a safe manor. As a result lives are saved. The Sepal Group traveled here to present him an award and to notify us that the prime minister will be recognizing him in the future. We are blessed to have Don Ayscue working for the Town of Cary.

Thursday’s regularly scheduled council meeting was a long one and lasted about five hours.

The first controversial issue was the Mills-Paterson rezoning for town homes at Carpenter Upchurch located in the 1500 block of Louis Stephens Road. Several residents, mostly in Preston Village, spoke against the rezoning. Council members felt that it was too intense for that site and unanimously voted to deny the rezoning.

The next controversial issue was the economic development agreement and HUD loan for the Mayton Inn in downtown. Several citizens spoke passionately for and against these items. Those speaking against mostly disliked the public-private partnership arrangement. Council members stated that this was an important piece in our vision to revitalize downtown and believed it would attract additional private investment in the area. These items were also unanimously approved.

The last item that took a significant amount of time was a quasi-judicial hearing. This hearing was continued so we are not allowed to discuss it. There were also several other items of note including the architectural concept of the new fire station #2 that will be on Chatham Street. The council picked the second option (http://www.townofcary.org/Assets/Staff+Reports/FD14-01+Attachment+2.pdf).

Emails from staff this week included current plans under review for August. These plans include:

This week’s activities will include a work session on the council’s annual retreat in January, a few meetings, and a few events.

Well that is all for this week. My next post will be on Sunday September 22nd. Although I have Facebook and Twitter accounts those are not the best means of communications with me. Please send all Town of Cary questions or comments to Harold.Weinbrecht@townofcary.org and email personal comments to augustanat@mindspring.com.