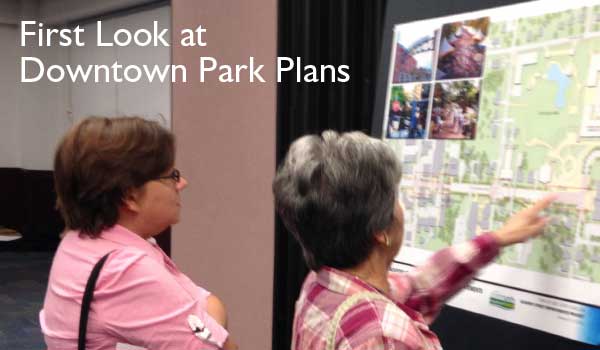 Cary, NC –  Have you been wondering what’s going on with the Downtown Park plans?

Cary residents reviewed early plans for the downtown park and streetscape improvements at a Public Forum on Tuesday, September 24, 2013 at the Herb Young Community Center.

Not everyone can interpret what these plans mean, so town staff was on hand to answer questions and add context.

The Town is working with the design firm Cole Jenest and Stone, and has hired artist Larry Kirkland, of Washington DC, to create the overall design. The focus for now is on the corner of Academy and Dry where the “Town Square” will be located.

Public Input session for the downtown streetscape and Park plan

Most residents spent time looking at the drawings for the Downtown park plans. On the other side of the room, were the sketches and design concepts for improvements to the Academy Street streetscape improvements. These included making public “squares” of seating and novel pavers in the roads to be highlighted during festivals when the street is closed to traffic. The current library sidewalk area will be enhanced among other areas up and down the street.

With only $2 million set aside for the downtown park from last year’s bond referendum, that money won’t fund an entire park project. The overall park is estimated to cost about 3 times that amount.  Town Council has directed staff to use $200,000 for the design and planning the general plan, and move forward with the town square first.

The street improvements along Academy Street will also include infrastructure including water and sanitary sewer line- as well as seating and public art, and surface street enhancement and repairs. This second project will be an additional $8 million and was already budgeted from downtown improvement money. 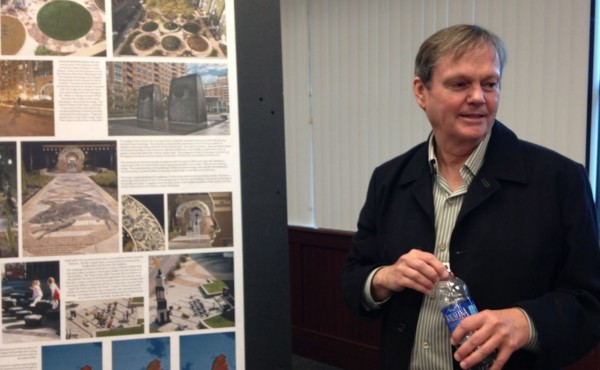 Larry Kirland, the artist working on concepts for the Town Square

That town square will set the tone for all the work to follow. It is projected that the designers will have “65% drawings” to bring before town council in March 2014, and that construction will begin Fall of 2014 through of Fall 2015. The purpose is two fold- needed repairs and to enhance the Downtown with what is hoped to become a “Signature Street” to link the many amenities and attractions that are within the Town’s Core between the Cary Arts Center and Town Hall.

Kirkland was quick to point out that this corner has to be right. There are talks of an important water feature, public art and decorative sidewalks. 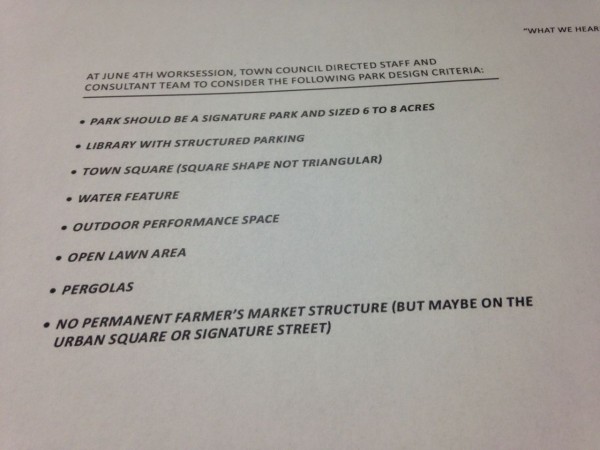 What won’t be in the park is a permanent structure for the Downtown Farmer’s Market. Many had assumed that the market, which has moved several times in recent years, would gain a physical structure in  the downtown park plans. But last night, it was clearly spelled out that that was not the case.

The Cary Library- which the Town will partner with Wake County for a larger, regional center, is definitely on the park site, albeit in concept only. Design for that won’t happen at the same pace as the corner, but there is money from the county for this project.

The downtown park plans definitely set aside more land than was previously recommended. The park will encompass 6-8 acres of the 11 the town has purchased in that area between Walker and Academy, Park and Dry/ Walnut Streets.

There was a board that very graphically illustrated how big an eight acre site is by taking the footprint of the Cary Park and superimposing it over Pullen Park in Raleigh, Moore Square and many other well known public park spaces. It will be substantial. A rough design will be created for the overall site, but detailed design and construction will only move forward for the corner “Town Square”

The plans are in what the designers call 30% phase, mostly conceptual and the town is soliciting feedback. After the town hears what residents have to say, the designers will refine the plans and present them in a work session to Town Council. From there, about in March 2014, the group will create plans getting closer to a final design, or 65% plans.

By the fall of 2014, work should be moving forward on the Streetscape with the park beginning construction in about December.