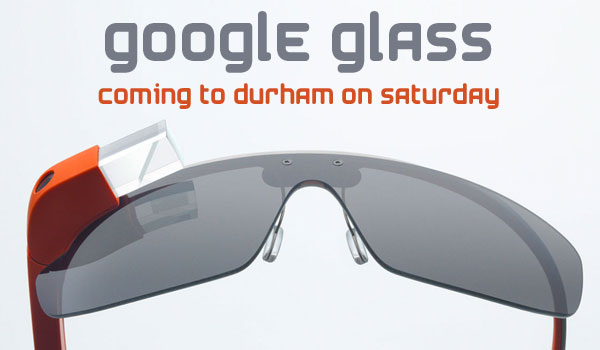 Durham, NC — Google Glass, the iconic prototype from the Silicon Valley tech giant, is having its first-ever public event. It’s at American Tobacco in Durham this Saturday, October 5, 2013.

All About Google Glass

Google Glass is a tiny device built onto a conventional pair of eyeglasses.

Glass sees what you see. It responds to voice commands like “Take a Picture” or “Record a Video.” You can ask Glass a question like “How tall is the Empire State Building” and see an answer projected in front of your eyes.

You can share with others, send and receive messages (hands-free) and translate your voice into another language.

Google Glass has been surrounded by stratospheric hype since its introduction to the public. A handful of experts have received a pair to try and others have seen Glass at trade shows, industry events and bars in Silicon Valley.

Now, Google is taking Glass on the road to showcase the new technology to the general public. The first stop on their nationwide tour is Durham, North Carolina.

Durham is a natural starting point for the Google Glass roadshow. It’s a city that has embraced technology and entrepreneurship, a city that’s bursting with creativity in the arts, music and dance. It’s a place where people dream big dreams.

I heard about the Glass demo yesterday and promptly RSVP’d, thinking we’d do a story on it today. Well, today, the RSVP list is closed.

No idea how many responses they accepted or what kind of madhouse it’s likely to be, but I’ll bring a story.

If you want to try your luck or just hang around to catch a little of the buzz, here’s the event details: