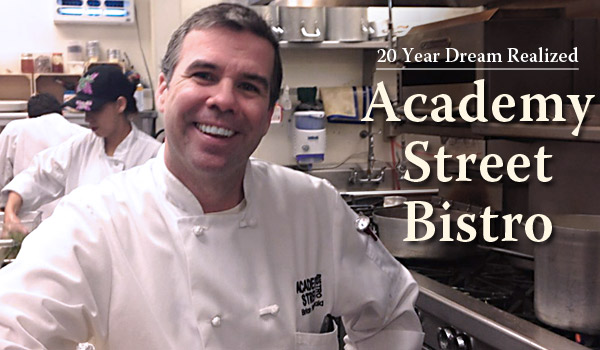 Cary, NC- For 20 years, Mary Lynn Fitzgerald has been urging her brother-in-law, a chef in New York City, to move to Cary and open a restaurant. Now, with the opening of Academy Street Bistro, her dream has come true.

Last December, when Klara’s in Ashworth Village went up for sale, Mary Lynn saw a golden opportunity and asked her brother-in-law, chef Brian Fitzgerald, to come down and take a look at the space with her. What they found was a restaurant that needed some work but had plenty of potential, and was right in the heart of a new Renaissance in Downtown Cary.

The timing was right. Trained at the Culinary Institute of America, Brian has been a chef in some of the best restaurants in the New York Metro area for over 20 years. At the time, he was working at the Harvard Club, but had always wanted to own his own place.

But the costs of starting his own business in New York were prohibitive. In Cary, with lower overhead, and good quality produce and other ingredients, Brian felt he could bring his New American cuisine to a new customer base that would be ready to appreciate what he had to offer.

MaryLynn always wanted a place in a quaint downtown area, and they both loved the location.  Both Brian and Mary Lynn echoed the fact that the Town has been very supportive of their efforts. They closed on the space in February and opened the restaurant in May. In Cary, that’s record time.  Luckily for the two, the space did not need extensive renovations: the kitchen was in good shape, but needed new flooring. The bar was extended and enlarged and can now comfortably seat 11. The bathrooms were gutted and completely remodeled. The rest was mostly cosmetic.

The patio had been underused at Klara’s and now is central to dining, giving the restaurant an additional 40 seats. The next idea is to investigate a temporary cover and heating for the cooler months, realizing that outdoor dining is popular in Cary.

The main room has recently begun to be rented out to closed private parties on weeknights. Plans are afoot to develop a special menu to do more of these events. 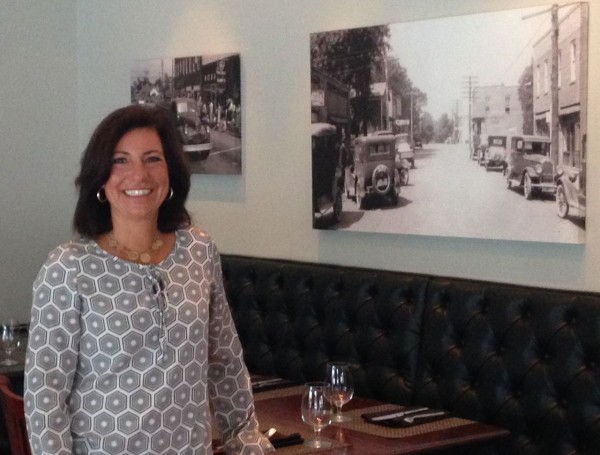 MaryLynn’s husband Kevin (Brian’s brother) is a silent partner, providing financing while he keeps his day job in software sales. Mary Lynn is the general manager, with a background as a financial analyst. Brian is the executive chef.

The Fitzgerald kids got involved with picking a name, and her oldest son Kevin Jr created their website. The younger son, Kyle created the Academy Street Bistro logo. The girls got busy with the decor.

An Extension of Home

MaryLynn emphasized that her experience as a mother of four was integral to their decision that “In Cary you have to be open for families.” The dishes at Academy Street Bistro are reasonably priced with great burgers and a crab cake dish that have the locals raving.

For the “young adult menu” she told me that her girls added dishes that they personally liked.  To that end, the decor is comfortable and not stuffy. Mary Lynn looks at the restaurant as “an extension of my home.” As manager, she makes sure the staff understands that the restaurant experience starts when the patrons walk in the door.

Brian has been especially happy with the selection of produce he can purchase at the local downtown farmer’s market on Saturdays and Tuesdays. The pair make a point of growing their local connections, serving beer and wine from local companies and they are looking to expand these offerings as they become available (Fortnight, anyone?).

The wonderful surprise for Brian was that he is able to create all the dishes he did in New York with what he can find right here in the Cary market.

At the Center of It All

MaryLynn added that everything at Academy Street Bistro is made daily from scratch. I was able to sample that day’s Crab Corn Chowder which made a dreary day that much cheerier. Their aim is to make the restaurant feel like its “your place” where you run into friends and when you are out with your family.

Located near the future Mayton Inn Hotel and The Cary movie theatre, and down the block from the Cary Arts Center and Town Hall, the restaurant is poised to be at the new epicenter of Downtown Cary’s revitalization.