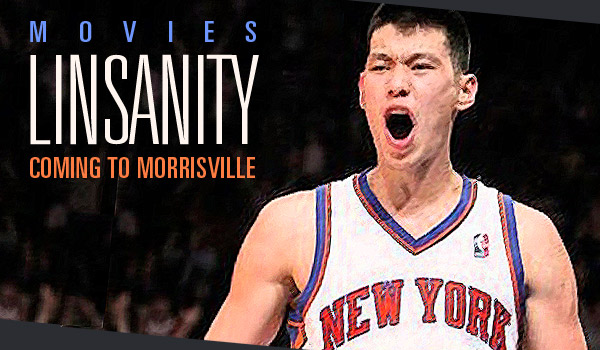 Morrisville, NC — For one night only, Linsanity is coming to Park Place in Morrisville on Thursday, October 24, 2013. Get tickets now.

Linsanity tells the story of Jeremy Lin, a third-string player for the New York Knicks who lit up the NBA over the course of a dazzling month in late winter of 2012.

It’s a great sports story and, most remarkably, all true. In January, Lin was sleeping on a relative’s couch. In February, he was going toe-to-toe with 15-time All-Star Kobe Bryant and sending the Lakers home in defeat.

But there was more. Lin was a graduate of Harvard. The last guy from Harvard to play in the NBA was Ed Smith in 1954, according to Basketball-Reference.com.

And, Lin is Chinese-American. Basketball has become big business in China, with elite players like Yao Ming making the jump to the NBA. But Chinese-Americans? Not so much. Lin’s success was avidly followed in China and across Chinese ex-pat communities.

As a Knicks fan, I was all over Linsanity from the very beginning. But it quickly spread like a wave across the U.S. and around the world.

What was Jeremy Lin’s game like during that period? Electrifying, crazy, sometimes sloppy. He’d dive to the hole, hit an impossible three and then turn it over. But his energy and passion lifted an injured team to a string of remarkable victories.

A cartoon by my friend Joe Petruccio that appeared on KnicksNow captured the spirit of the moment. 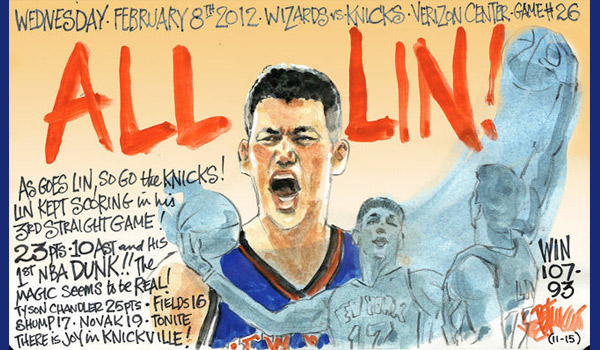 Soon enough, the stars came back, Lin got his own injury and he was traded to the Houston Rockets after the 2012 season. The Rockets have been in rebuild mode, adding James Hardin at shooting guard and, most recently, Dwight Howard at center. If the Rockets can pull together around their own “Big Three,” we might see Jeremy Lin on ESPN again in 2013-2014.

In the meantime, go see Linsanity on October 24 if you like a good sports underdog story. It’s an official selection of the Sundance Film Festival.

I’ll be there, wearing my Knick shirt.

Get a taste for Linsanity with this trailer or see it on YouTube.