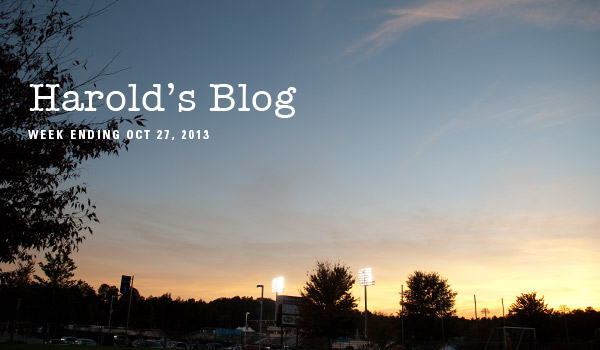 Cary, NC — The week’s activities were comprised of a few long nights including a Mayors Association meeting, a neighborhood meeting, and a council meeting.

Monday I called council members for their comments and concerns on the agenda for the upcoming council meeting on Thursday. Unfortunately, I was only able to get in touch with two who had no major concerns.

Later in the day I met with management, directors, legal, and administration to go over the items on the agenda.

Two upcoming Public Hearings on Carpenter Upchurch Road and Kildaire Farm Road were creating a lot of feedback from citizens. In addition, a proposed rezoning at Cary Park was not properly posted so staff recommended council hold that public hearing at a later date.

After discussing the agenda staff also discussed the upcoming November meeting. Due to the number of items staff is considering holding a second meeting in December. That meeting would only have quasi-judicial hearings.

Monday night I attended the Mayors Association meeting at Wake Med in Raleigh. Nine of twelve mayors were in attendance. Not attending were the mayors of Raleigh, Knightdale, and Fuquay Varina.

Our featured speaker was from the John Rex Endowment. He stated that their endowment supports an environment where children and families in greater Wake County live healthy lives. Therefore, they will be awarding Wake County Healthy Community Grants that will support local municipalities to become healthier cities and towns through collaborative action.

These grants will focus on improving policies in and implementing changes to environments that increase children’s access to healthy food and safe opportunities for active living. Five of Wake County municipalities will receive multi-year funding which should total $70,000 per year. A formal announcement will be made in January along with an RFP.

Our meeting concluded after about two hours.

Tuesday I met with the town manager, assistant town manager, and his advisory staff for about half an hour. We discussed operational issues and economic development issues. Neither of which I can go into detail at this time.

Later Tuesday night I joined Mayor Pro-Tem Adcock and council member Yerha in a neighborhood meeting about the proposed rezoning of Cornerstone Presbyterian Church. We talked about a lot of issues including flooding, traffic, enforcement, and trust. It is my hope that everyone had their questions answered. The meeting lasted about two hours.

Wednesday I taped the November episode of Cary Matters with Mayor Pro-Tem Adcock. The main topic was the goals and priorities of the three newly re-elected council members. We also talked about the town’s new social media search tool and an upcoming document shredding event.

Thursday afternoon I met with representatives from Farmington Woods Elementary. I taped a welcome message to celebrate Farmington Wood’s 10th anniversary of being an IB (International Baccalaureate) magnet school. IB-trained teachers work together to create units of inquiry that inspire students to think about big ideas to promote international understanding and a global perspective. As part of this program students begin a study of Spanish in kindergarten and use advanced technology to explore the world around them. Congratulations and Happy Birthday Farmington Woods!

Later Thursday the council held its second regularly scheduled council meeting of October. In the recognition portion of the meeting I had the joy of reading a proclamation celebrating the 55th Cary Band Day. I will be attending the event on Saturday, November 2nd. More than 30 marching bands from North Carolina and Virginia will be competing in a field competition.

The council meeting also included three public hearings, two of which drew several speakers. The public hearing on a proposal by a property owner to put 285 apartments at Morrisville Parkway and Louis Stephens Road drew unanimous criticism from nearby residents. Those issues included density, traffic, safety, and loss of quality of life. Unfortunately, the public hearing was scheduled at the same time of a homeowner association meeting. So the council decided to continue the public hearing until the next council meeting on November 21 to allow those citizens attending the homeowners meeting the opportunity to voice their opinion.

The second public hearing that drew several speakers was Land Development Ordinance Amendment on Champion trees. Developers and attorneys representing developer interest complained that this change and the existing ordinance would make it almost impossible to develop land. This proposal was partly to clarify language in June champion tree amendment and to make it more flexible. The council decided to let the proposal continue on to the Planning and Zoning board for their recommendation. In addition, the council directed staff to create a stakeholders meeting of developer interests and environmental interests to work out issues related to the ordinance amendment on champion trees.

The last action taken by council was to direct staff to investigate potential changes to allow painting brick and masonry in certain situations. The council meeting concluded at 9:30 PM.

Saturday I had the honor to be a part of the Eagle Scout ceremony for Patrick Lathan, Ryan Fleming, and Jacob Coleman. Their Eagle Scout projects included a set of concrete stairs, benches at a middle school, and planters with retaining walls. We are blessed to have great youth in our community and I hope they continue to serve others in the years ahead.

In emails from staff this week council members received the third quarter report. Some of the highlights include:

This week’s activities include the groundbreaking of the MetLife buildings, Cary Band Day, a talk with the Kildaire Farms Homeowners Association, and a meeting with School Board member Fletcher.

Well that is all for last week. My next post will be on Sunday November 3rd. Although I have Facebook and Twitter accounts those are not the best means of communications with me. Please send all Town of Cary questions or comments to Harold.Weinbrecht@townofcary.org and email personal comments to augustanat@mindspring.com.