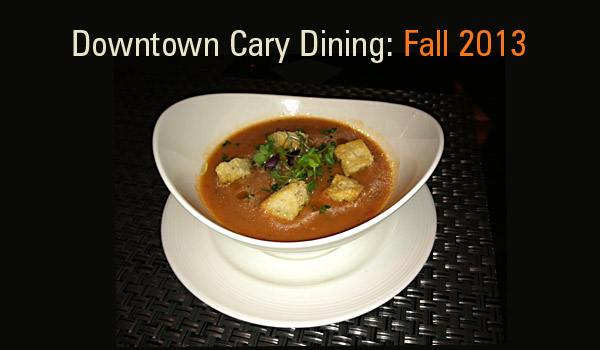 Cary NC- The last stop on the Cary dining tour is downtown. What was once a sleepy scene has grown to more than a dozen eateries. As Cary grows and the town is working on branding strategies, it is important to recognize the value of quality businesses and restaurants. The restaurants in downtown not only serve delicious food, but their owners are dedicated to the community and its members. Some of the restaurants in downtown include: Academy Street Bistro, Café 121, Havana Grill, Taipei 101, and Serendipity. 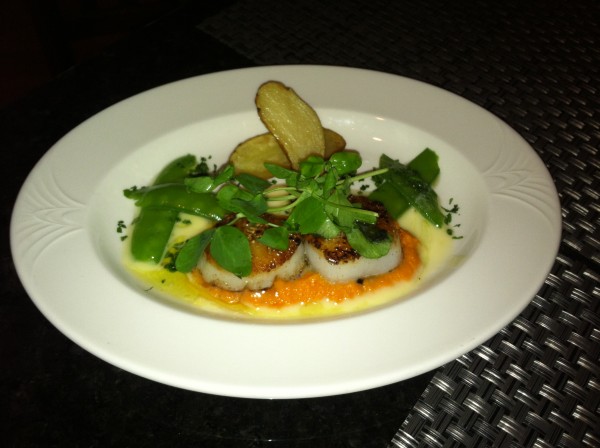 Academy Street is the newest restaurant in Downtown, having been open just since May of this year. Mary Lynn Fitzgerald  convinced her brother-in-law Brian, a chef, to come open the bistro with her.

Mary Lynn says that “Brian’s food is the artwork and everything else is the frame.”

For the past twenty years, Brian was working as a chef in some of New York City’s prestigious hotels and restaurants. Brian is happy to share his New American style of cooking (a blend of French and Italian styles) with Cary. I tried several of Brian’s creations and enjoyed them all.

First, I had the gazpacho soup; a chilled vegetable soup that has a touch of spice. Then, I had the crowd-pleasing crab cake coated with bread crumbs and mixed with roasted pepper and chives. This delectable dish is lightly deep-fried in the oven so they are slightly crispy on the outside and moist throughout. Also, Brian’s seared diver sea scallops paired with a carrot ginger puree are not to be missed. For dessert I tried the chocolate mousse profiteroles topped with Chantilly cream. Sometimes mousse can be too rich for my liking, but the profiteroles had just the right amount of sweet, chocolate taste.

Academy Street has an extensive wine list with Beaulieu Vineyard as the house option. The Sauvignon Blanc was a refreshing, light wine that went well with the seafood. There are also four beers on draft, including a local and seasonal beer.

Brian’s upcoming new fall menu items are butternut squash soup with apple chutney and toasted pumpkin seeds and grilled quail salad with sautéed Brussel sprouts and Cremini mushrooms. Academy Street also has plans for beer and wine dinners, a chef’s table with a tasting menu, and live jazz music in the evenings. MaryLynn would like to cordially invite Cary citizens and visitors to come and mingle at Academy Street Bistro– an extension of her home. 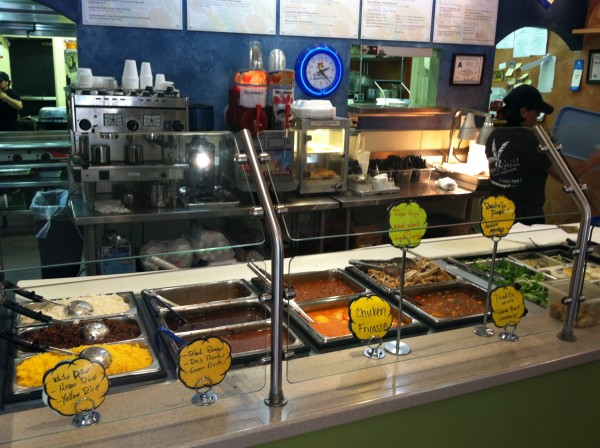 The hot buffet line at Havana Grill in Cary

About a five minute walk from the Bistro is Havana Grill, located at 404 West Chatham Street. The Cuban restaurant is the brainchild of Chef Robert Cordoza who opened its doors in June of 2007.  Cary welcomed Havana with open arms. Each year since 2007, sales have been up, not just in the restaurant, but also the number of catering orders.

For those unfamiliar with Cuban food, Cordoza describes it as “very flavorful, but not spicy, incorporating both Caribbean and Spanish cooking styles.” Cordoza says that people are often scared to try Cuban food because they think it will be too spicy, but that is not the case.

Havana Grill is a great place to go if you are new to Cuban food because you can order from the buffet line and see all the dishes first. There is a varied selection each day including soups, beans, salads, sandwiches, pork, chicken, beef, and/or seafood dishes. Cordoza says that the roasted pork is one of the most popular choices. The pulled pork is marinated for 48 hours in a special sour orange sauce and then slow-cooked for eight hours resulting in a flavorful end product.

A favorite on the regular menu is the Cuban sandwich, which has been deemed the best in the Triangle by the News and Observer for the last three years. There are daily lunch ($6.95) and dinner ($7.95) specials with one meat and two sides. Some specials, such as fried flounder and seafood paella, have been so well received that they are offered every week.

Havana Grill has also received multiple awards for its desserts. There are currently four different desserts on the menu, and I tried the Tres Leches, (three milk) cake. This cake is delicious and moist, but rich; it definitely needs to be shared. Cordoza says that it takes two days to make the cake, which is soaked in condensed, evaporated, and half and half milk, then topped with whipped cream and a cherry.

Havana Grill is also an entertainment venue where you can go for family karaoke on Fridays and salsa dancing on Saturdays. Both events are free.

Cordoza is happy to be a part of the downtown Cary community. He volunteers with social services and the Cary Police Department. This year Cordoza won the Businessman of the Year award from La Noticia newspaper.

On so many accounts, Havana Grill is an award-winning restaurant. Don’t be afraid to try new things and check out Havana Grill.

Another new restaurant in downtown Cary is Café 121 owned by North Carolina native Chef Gregg Hamm. Cary is home to the second location of Café 121; the first opened in Sanford six years ago. Chef Hamm went to school at Johnson and Wales and is now the department chair for Hospitality and Culinary Art and the Natural Chef Certification program at Central Carolina Community College.

Hamm’s homemade dishes combine a fusion of classic Asian and American cooking styles. For lunch there are plentiful salads, sandwiches, soups, and wraps. The spinach salad with feta cheese, carrots, roasted red peppers, crispy noodles, and Asian dressing has already become a customer favorite. Meat eaters will be pleased with the dinner menu that includes classics such as prime rib and chicken Florentine. Recently Hamm added fried green tomatoes and pimento cheese sandwiches made with North Carolina hoop cheese to the menu for a touch of Southern flair.

Café 121 has wine and beer to drink, as well as, specialty cocktails like blueberry lemonade (with vodka) or raspberry spritzer that both sound pretty tasty.

On Saturday and Sunday, you can try Café 121’s brunch menu which has omelets, hand-breaded chicken and waffles, and numerous other selections.

Hamm will change the menu every quarter, and it will be modified to fit the customers’ wants. He says that at Café 121 the staff is dedicated to personal service, and they will learn your name. Hamm decided to open the café in Cary to give community members a local restaurant to make their own. Go sample Hamm’s creations and give him your feedback. He may just add your favorite dish to the menu.

At Taipei 101 you can get a filling lunch for as little as $5.85. There are several options such as broccoli and chicken and Kung Pao Chicken, and orders include your choice of fried or steamed rice, egg drop, hot and sour, or egg drop soup, and an egg roll. Taipei 101 serves Taiwanese and Chinese food not found on your typical Chinese buffet line.

Serendipity, a gourmet deli, is one of the longest standing restaurants in downtown Cary. It’s a casual eatery with a nice covered patio where you can eat specialty sandwiches, soups, or salads. If you want to stop in for dessert, there are pies, cakes, and cookies galore.

Dorry’s Downtown serves breakfast and lunch and has recently begun serving dinner. They have some of the best wrap sandwiches in town.

Bosphorus is a Turkish delight, with gyros, hummus, falafel and more. Best kept secret- they make their own amazing bread sprinkled generously with sesame seeds and served with a dipping oil after you order.

Whether your taste runs to Cuban, Turkish, Chinese or New American, check out the burgeoning restaurant scene in Downtown Cary.

Story written by Jamie Buning is the fourth in a series looking at the variety of dining experiences that can be found in different areas within the town of Cary.