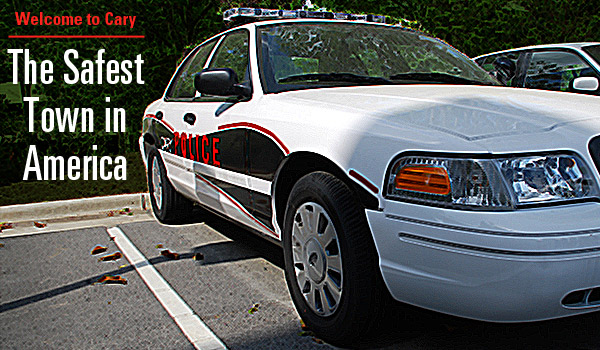 Cary, NC — Based on recently released FBI Crime Data, Cary has the lowest crime rate in America for municipalities between 100,000 and 500,000.

The Safest Town in America

Based upon data recently published in the FBI’s annual Uniform Crime Report (UCR) and reviewed by the Town of Cary’s Crime Analysis Unit, Cary, North Carolina has the lowest total crime rate in America among municipalities with populations of 100,000-500,000. The ranking is compiled using the FBI’s data for Total Crime Rate per 1,000 People.

Data from the report is generated from over 18,000 law enforcement agencies that submitted their information through a state UCR Program or directly to the FBI’s UCR Program. The FBI has collected, published and archived these statistics since 1930.

Cary consistently ranks as one of the safest municipalities regionally and nationally. For 13 consecutive years, the Town was the highest-ranked municipality in North Carolina and in the southeast based on reports by CQ Press and its annual publication, “City Crime Rankings: Crime in Metropolitan America.”

Additional information about the 2012 FBI Uniform Crime Report is available at www.fbi.gov.

Cary is not crime-free. Citizens are reminded to keep garage doors closed, front doors locked and remove valuables from your car.

That’s one of the reasons Cary is a safe place. We communicate about these issues.

Cary Police do a great job preventing crime, responding to incidents, apprehending suspects and keeping the town safe. But they do an even better job reaching out to the community with initiatives like geo-policing, Project Phoenix and National Night Out.

Even though Cary was incorporated more than a century ago, we are, in some ways, just starting our journey. But for today, let’s bask in the glow of an admirable safety record and the title of Safest Town in America.