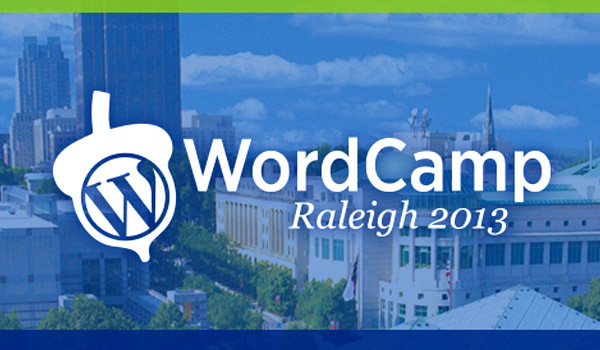 Raleigh, NC — Just a note to all you WordPress enthusiasts out there: WordCamp Raleigh is coming up on November 23-24, 2013. Selling out fast, so get a ticket now.

WordCamp Raleigh is a two-day conference focused on intensive workshops for WordPress in three categories: Users, Power Users and Developers.

Over the course of a day and a half there will be 24 sessions, split up into 3 separate tracks – Users, Power Users, and Developers. Saturday will be a full day of sessions starting with registration at 8 am and lasting until 5 pm with a couple of breaks and a complimentary lunch included. Sunday will start a bit later and have 2 sessions per track with a break and a keynote presentation.

Like all WordCamps, WordCamp Raleigh’s main goal is to get as much great WordPress information out to the local community as possible. Attending WordCamp Raleigh is your chance to meet local WordPress users of all skill levels and cram as much information as you can in one weekend. On top of that, you also get a commemorative t-shirt!

WordCamp Raleigh 2013 is at the College of Engineering at N.C. State University.

Tickets for the two-day event are $35. Includes a t-shirt and lunch on Saturday.

A quick look at the website shows about 100 people already registered and only 139 tickets left – and the event is still almost a month away. It will sell out.

Get tickets now to WordCamp Raleigh 2013.

Story by Hal Goodtree, a speaker at WordCamp Raleigh 2013.