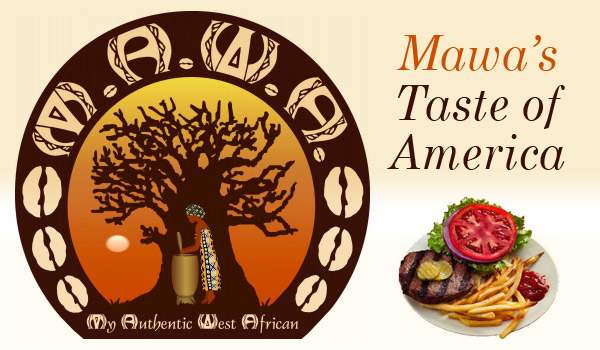 Cary, NC – Remember Mawa’s Taste of Africa, a charming and delicious eatery formerly in Morrisville? Mawa has a new restaurant and a burgeoning food empire. It’s called Mawa’s Taste of America and it’s in Dakar, Senegal.

4,035 miles from Morrisville (as the crow flies) is Dakar, Senegal on the west coast of Africa. Mame Hughes and her husband Kevin, the owners of Mawa in Morrisville, moved to Dakar to work on a food project with the Senegalese government. Mame was born in Senegal and moved to the United States for school in the 1980’s. She met a New Yorker, got married and raised four children. 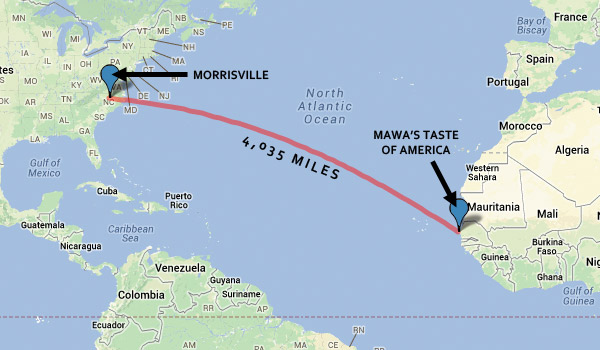 With the kids off to college, it was time to move back to the land where Mame was born.

That was in 2011. Now, Mawa Foods has three restaurants and a line of condiments and sauces.

Recently, Mame converted one of her restaurants to a new concept for Dakar, a city of 1.056 million people: Mawa’s Taste of America.

You can get pancakes and bacon for breakfast or Belgian waffles at Taste of America. You can get grits.

For lunch, there are sandwiches and omelets, pink lemonade, funnel cakes and bagel with cream cheese. Mame has a pizza oven and is contemplating a delivery service.

See the menu for Mawa’s Taste of America.

As Featured in Dakar Eats

Mawa’s Taste of America was featured recently in the food blog Dakar Eats. They linked back to our story about the restaurant in Morrisville and that’s how we found out about Mame’s latest ventures.

While it’s remarkable that Southern culture has become so cosmopolitan as to be exporting a taste for grits and funnel cakes to Dakar, we still miss a good Lamb Tajine right here in the Triangle.