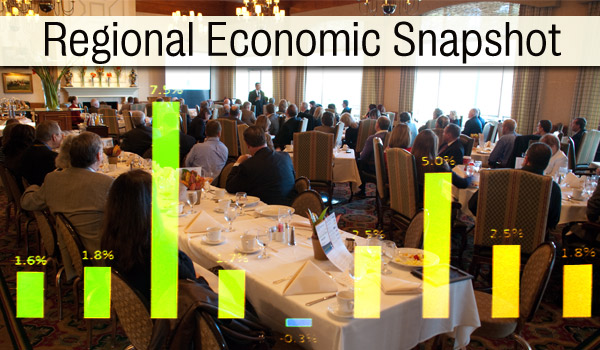 Cary, NC — Economist Ted Abernathy treated members of the Cary Chamber to a regional economic snapshot on Wednesday morning at Prestonwood. There were some surprising insights about the Triangle, the state and our home finances.

Ted Abernathy is Managing Partner of Economic Leadership LLC. He was formerly Executive Director of the Southern Growth Policies Board, Executive Vice President of the Research Triangle Regional Partnership and Director of Economic and Employment Development for the City of Durham.

As a region, the Triangle is doing very well, thank you. Within the Triangle, Cary has the region’s lowest percentage of unemployment. 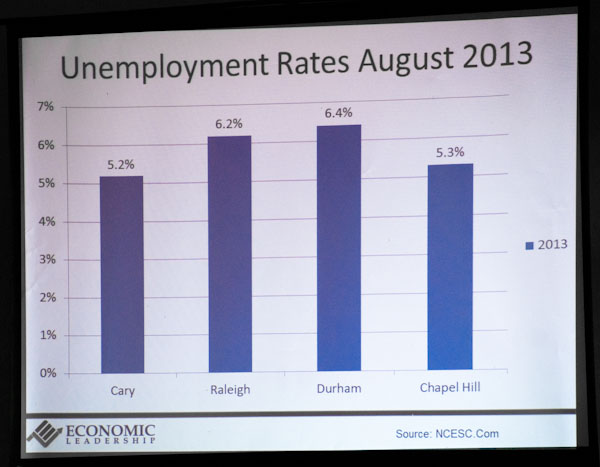 Still room for improvement, but far better than the statewide average of 8.7%.

Abernathy showed an interesting chart of employment in North Carolina by sector from 2000-2012. 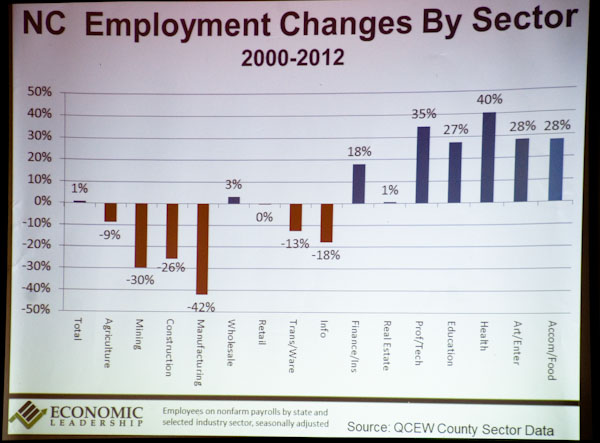 These changes over more than a decade are even more pronounced in Wake County.

Brown bars with percentages are Wake County; blue and red bars are statewide. 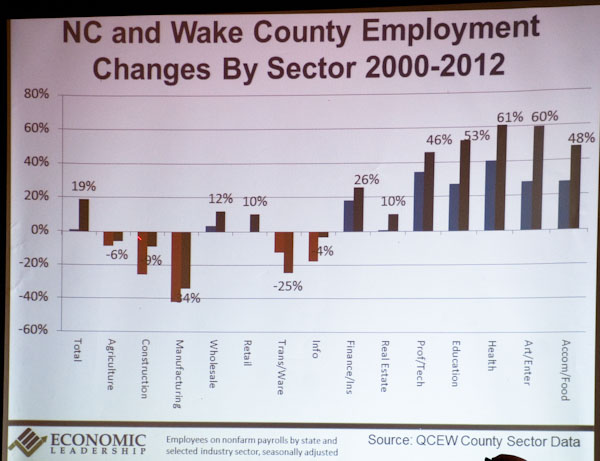 Manufacturing, construction, transportation and agriculture jobs are all down sharply.

The Great Recession had profound effects across the economy. That included bursting a housing bubble. 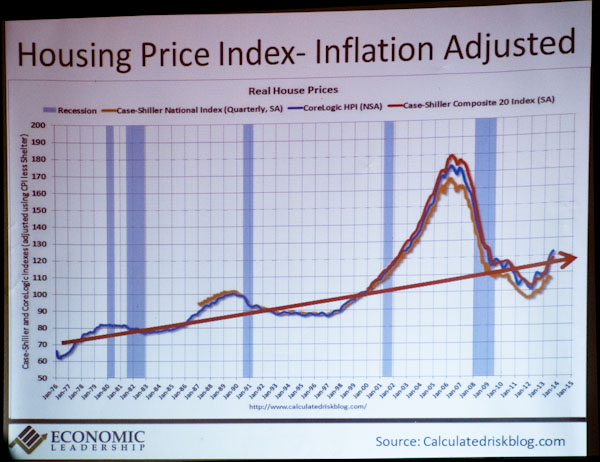 The real estate market has been on the upswing since January of 2012 and prices are rising across the region.

Here’s a chart that should make Cary citizens (reasonably) happy: 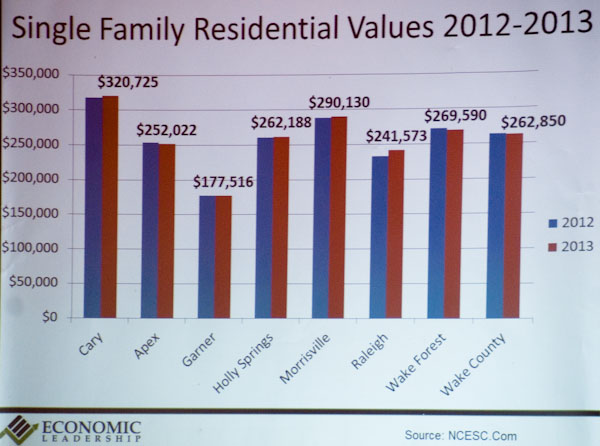 Two charts Ted showed pointed out the relationship between higher education and a job. The first chart illustrates the shift in educational levels from 1980-2010. 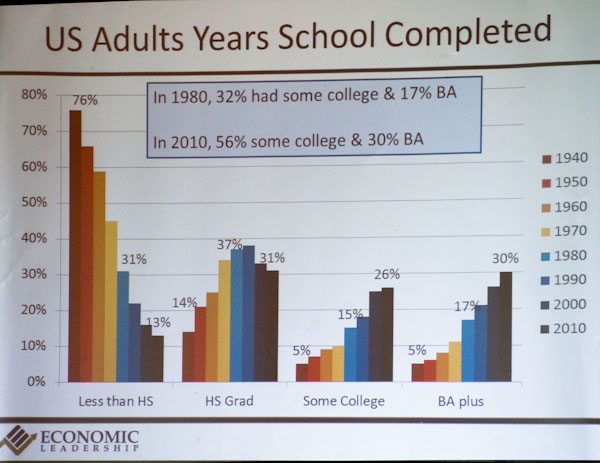 And now, look at how the U.S. job force fared in 2012 based on education level. 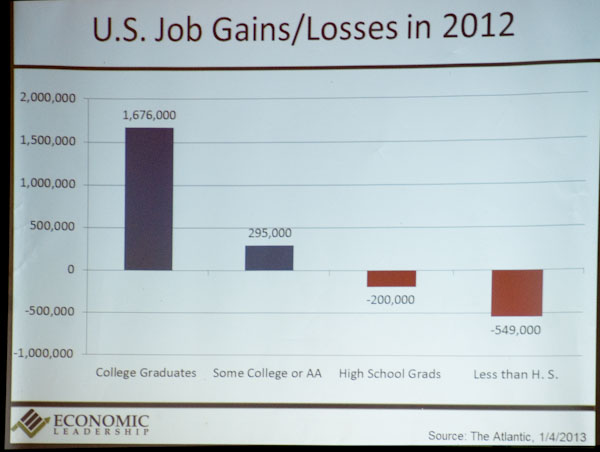 One concern Ted pointed out was rising student debt. While overall employment has been rising since the depths of 2009… 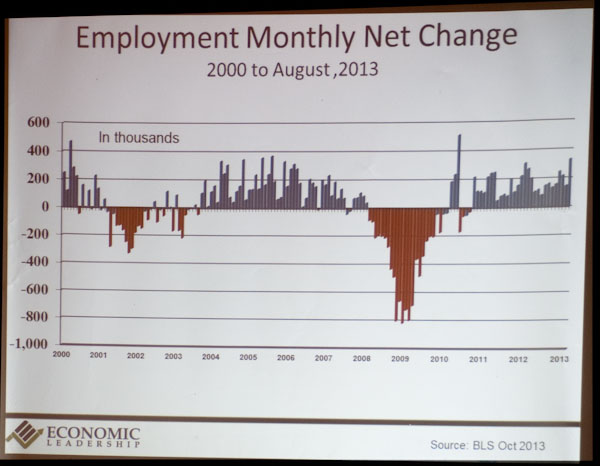 … student debt has been exploding, particularly in the area of loans. 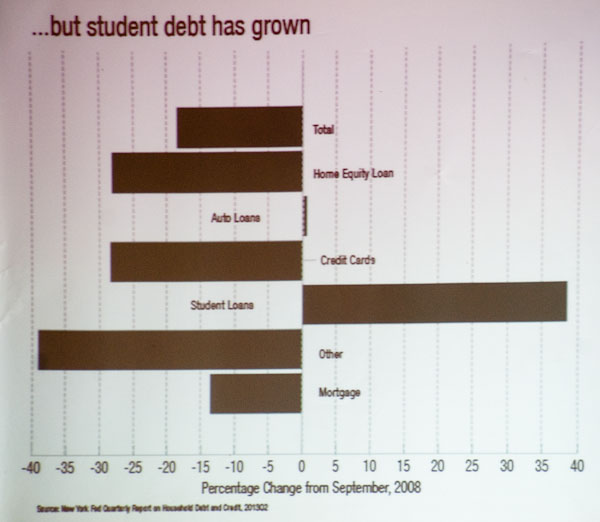 Exports have been an engine of growth in many Southern States over the past few years. Not so North Carolina. 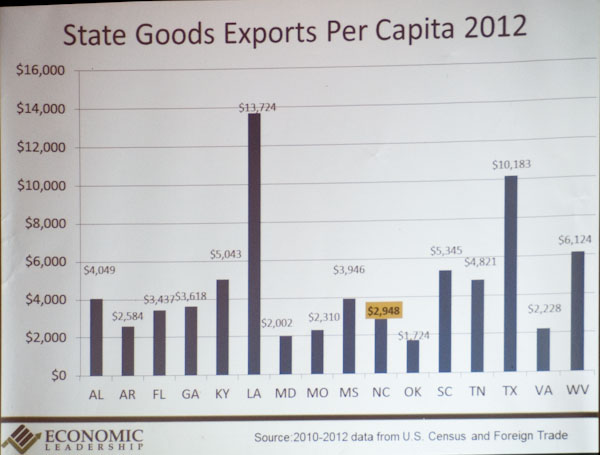 For Louisiana and Texas, this growth has been fueled in large part by energy. But transportation infrastructure, manufacturing and policy all drive exports.

Our traditional trading partners, including Canada, Europe, Australia and Japan, are in the doldrums. U.S growth is sluggish.

Brazil, Russia, India and China (known as the BRIC countries) continue to boom, albeit at a slower pace. 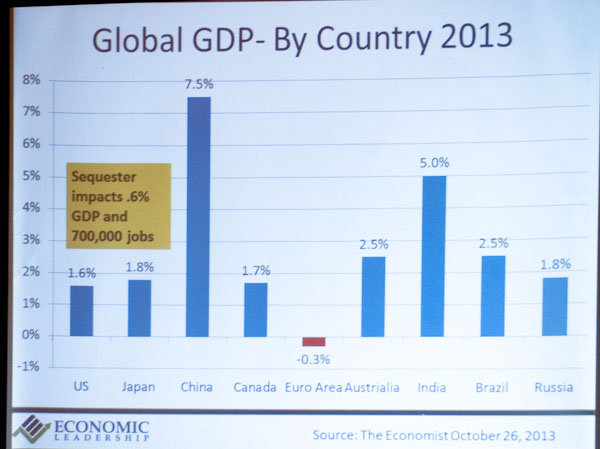 The net-net is that we have to export more to have a balanced economy in North Carolina.

Editor’s Note: I’ll be moderating a luncheon discussion with Mital Patel during Global Entrepreneur Week at Embassy Suites in Cary on Wednesday, November 20, 2013. Find out how you can go global. Get tickets.

Ted always ends his talks with some predictions about the future. 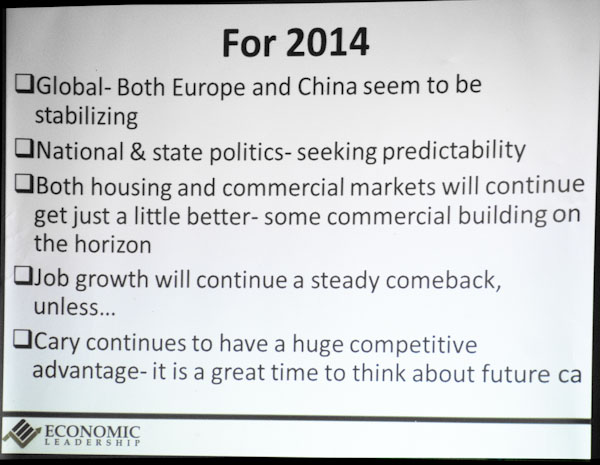 Bottom line: Things are changing around the world and we need to evolve in North Carolina.

Across the Triangle and here in Cary, we should capitalize on our good situation and work now toward building more capacity for the future. 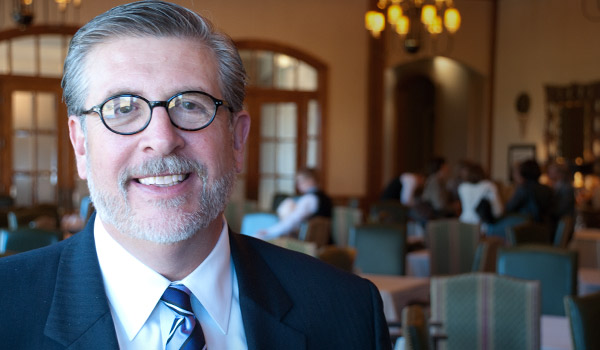 Story and pictures by Hal Goodtree. Slides by Ted Abernathy. Presented by the Cary Chamber of Commerce.