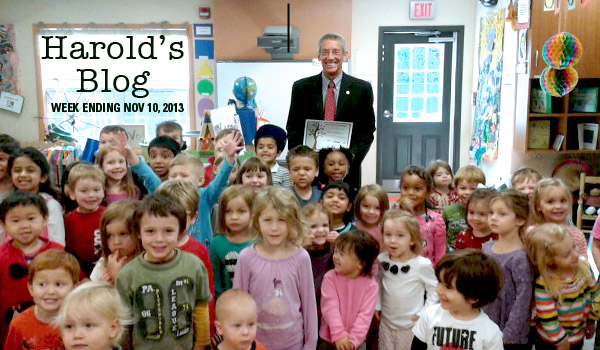 Cary, NC — This week was lighter than normal with just a few meetings and events.

Monday I had the pleasure of being a celebrity reader at the Grove School of Cary. I read four books to most of the students at the school who were between the ages of 1 and 6.

The Grove School, in addition to being a 5 star school, has several unique aspects in its curriculum. For example, there have smart boards located throughout the school to allow a more interactive teaching environment. The Grove School of Cary is a green school complete with a green house. Through hands on experience their students learn the value of gardening, recycling, and sustainability.

It was a great school visit and I had a wonderful time reading to all the children.

Tuesday I met with Mayor Pro-Tem Adcock and the town manager to review the Imagine Cary process. Our meeting included concerns expressed from citizens and council members.

Later Tuesday I met with the President and Market Leader of City Barbeque that will be building a restaurant on Kildaire Farm Road at the site that used to be Cinelli’s. The meeting’s purpose was so they could explain their product and express how they want to be involved in the community. From our conversation their meat will be cooked in a unique way that will make their Barbeque good even without sauce. I can’t wait to try that. They also talked about how their franchise has spread and how community involvement has always been a key initiative. We talked about several opportunities to plug them in to giving back to the community. Our meeting lasted about half an hour.

Wednesday I attended the graduation ceremony of the Cary Citizen Police Academy. This is a 12-week program that covered topics like criminal and constitutional law, patrol, criminal investigations, youth services, DWI detection, and domestic violence. The class included all participants taking a trip to the firing range used for Cary Police training. Citizen Police Academy is a prerequisite for citizens interested in becoming members of the Cary’s Citizens Assisting Police (CAP) Team. In my remarks I thanked them all for taking time out of their lives to help make Cary the safest community in the nation. In addition, I encouraged each of them to become a member of the CAP team.

Thursday I substituted for council member Robinson in an Operations Committee meeting. We had two topics for discussion.

Our first discussion option was a report on things we can do to increase recycling. The committee recommended that council remove the $1 fee for adding an additional cart, investigate using the biannual survey to get information about education efforts, and provide information about composting.

Later Thursday I along with two council members met with members of staff to go over several items. Those items included Imagine Cary, downtown streetscape, and federal lobbying.

Sunday I had the pleasure of participating in the Teen Korps award ceremony. Teen Korps is a national non-profit youth volunteer organization that engages young people in community service. It was established in 1994 in Rancho Santa Fe, CA and has over 70 chapters in 8 states across the US.

The Cary Chapter leads the nation in Presidential Service Awards. This year the Cary chapter had over 1300 hours of community service.

In addition to providing remarks I handed out awards and was part of the photos with award winners. The entire program took about an hour.

In emails from staff this week there was information passed along about public Wi-Fi. The Town of Cary is working with the NCNGN Project (Gig.U) and has been working on it for more than a year. Town IT staff is reviewing proposals and is currently meeting with prospective vendors. One of the proposal requirements is to have high speed wireless available to under-served areas. Several models for subscription have been used throughout the country by various vendors and our goal is to get it subscription free or for a very nominal fee. The staff hopes to be able to make a recommendation to council within the next several months.

Emails from citizens include a complaint about the town’s streetlight policy, a question about the town’s rezoning process as it relates to roads, a request for open data, and a concern about crime in apartments.

This week will be a light week and will include meetings with the town manager and Mayor Pro-Tem.

Well that is all for this week. My next post will be on Sunday November 17th. Although I have Facebook and Twitter accounts those are not the best means of communications with me. Please send all Town of Cary questions or comments to Harold.Weinbrecht@townofcary.org and email personal comments to augustanat@mindspring.com.