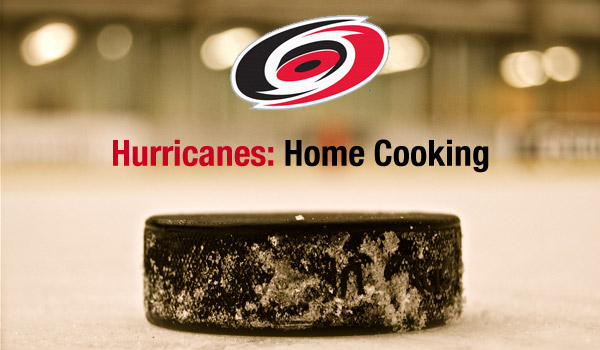 Raleigh, NC – The Carolina Hurricanes have a taste for home cooking as they won their first 2 games of a 5 game home stand.

The Canes did make the first win exciting as they again played a slow game that did not have a lot of great hockey for the first 55 minutes.  They came from behind to win 2-1 in overtime against the Philadelphia Flyers on Tuesday November 5.

They won a faster paced game that looked like  2 boxers sparring with each team jabbing and dancing but not many real threats, against the New York Islanders, 1-0 on Thursday November, 7.

The Flyer game was an ebb and flow game with great plays at some points and some points that looked like the AHL.

Early in the first, Nathan Gerbe  made a great pass to Jordan Staal that everyone thought was a sure goal but Steve Mason made an outstanding save.

Cane rookie Ryan Murphy made a rare turnover at his blue line that resulted in goalie Justin Peters make 2 of his better saves of the night.

The Flyers, who are also struggling, did manage to get some more pressure on the Canes including one shot that beat Peters but hit solid iron that does not go down as a shot on goal.

In the second with the Hurricanes on a good looking powerplay, Eric Staal retrieved a puck in the corner and made a sharp pass to Gerbe who was making a dash in front of Mason for a hard chip in but Mason again came up with a big save. Clearly the Canes were having the better opportunities but Mason brought his A game.

Both EStaal and Alex Semin had excellent games.  Semin had a game high 6 shots with some that were simply amazingy.

In the third, EStaal had speed and Juri Tlusty on the left wing with just one defenseman in between. Staal saw an opening and sent a slap shot that had to be in the 100 mph range but again Mason made the save.

Late in the third, Gerbe got tired of being  hammered in front of the Flyers net so he took on Mark Streit who is a half foot taller than Gerbe.  Gerbe handled his own and got an extra 2 minutes for being the instigator.  The Flyers scored on the powerplay for a 1-0 lead with less than 4 minutes to play.

The Hurricanes pulled Peters for the extra skater with about 1:45 to go and kept constant pressure in the Flyers’ zone. Tlusty was in the near corner, passed the puck behind the goal to EStaal.  Staal held the puck with his head up then saw Jordan Staal get behind the defense then sent a pass though the crease right on Jordan’s tape who buried the puck to tie the game with less than a minute left.

In overtime, Manny Malhotra checked a Flyer  off the puck in the center zone.  Ron Hainsey retrieved the puck then made a fine looking lead pass to Malhotra who broke in with 2 defenders barely trailing on his left.  Malhotra, who nearly lost his left eye 2 years ago, went to his backhand and sent a game winner top shelf that was a storybook worthy with every Cane joining him on the ice for the celebration. A great ending to an otherwise poorly executed game.

Two nights later the Hurricanes hosted the somewhat surging Islanders who made some key trades to shore up their team by getting Thomas Vanek.

John Tavares, one of the top 3 players in the East, is already having a great season and is always a threat but Justin Peters shut him down on several potential scoring chances.

Early in the first, Ron Hainsey had the puck on the right point but didn’t have any sure passes so he did what coaches tell you to do and ‘throw the puck towards the net and good things will happen.  Radek Dvorak was camped to the left  of the Islanders goal, just trying to cause problems for goalie Kevin Poulin. Hainsey’s toss hit Dvorak on the hip and bounced in the goal for a 1-0 Cane lead that hasn’t happened in a long while.

A short while later Peters made an unbelievable save with his pad as he dove out of the crease as if he was trying to do a belly flop in a pool. While this game had more excitement than the Flyer game, neither team played to their potential.

If something happens  games in a row means it’s a trend, then Nathan Gerbe is the shortest enforcer in the history of the NHL.  For the second consecutive game, Gerbe got into another tussle.  This time against Travis Hamonic who is nearly a full foot taller than Gerbe.  No question Gerbe got the better of this tango including a couple of good slashes on the ankles before the dance started.

The Canes and Islanders had a lot of  north and south hockey with some decent shots with both goalies playing above their normal levels and stopping every shot or deflection. Dvorak’s goal was the lone score of the game giving Peters his third career shutout and putting the Canes on a 2 game win streak.

The next 3 games are all home against strong western conference teams.

Elizabeth’s Gets Storefront Facelift – Town Pays Half
Scroll to top