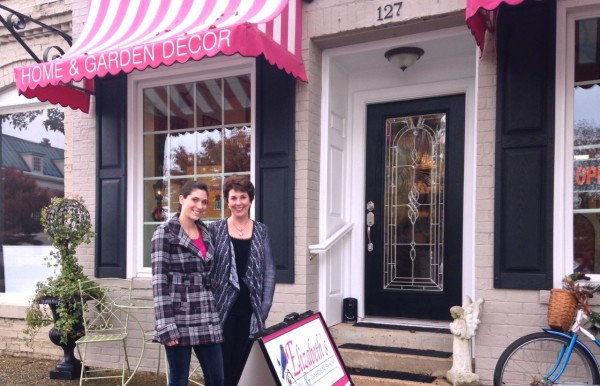 Cary, NC – Thanks to help from the Town of Cary, the owners of Elizabeth’s Home & Garden Shop in Downtown Cary have a spiffy new storefront.

A few years ago, Cary Town Council declared an area of Downtown a BID (Building Improvement District) and made it possible through a Facade Grant program for owners to improve their building facades with the Town’s help.

Through this program owners can work with the town to give their buildings makeovers. They must submit detailed plans and costs to the Town’s Planning Department and if approved, the town will re-imburse the shop owner  half of the cost, up to $10,000.

Surprisingly, only a few businesses have taken advantage.

George Sullivan is very happy not only with the results of his store’s new improvements , but he was very impressed with how well the town planners helped his efforts.

“All I can say is the Town of Cary really took care of us and made sure the process went flawlessly from start to finish. They did an awesome job. Thank you Town of Cary.” – George Sullivan

The shop opened a year ago, just after Thanksgiving and in time for last year’s Ole Time Winter Festival. When the owners first opened, between the weather and all it takes to get open, they put off working on the exterior until Spring.

Elizabeth explained that she and her husband George started to think about the improvements last spring and hired a designer to help put the plans together.

They worked with Phil Smith and Juliette Andes, who were in charge of the grant process and who helped put the whole thing together while Mary Beerman, Debra Grannan and Jeph Allen made sure all of the permits and approvals were met and filled out correctly. Kevin Hales helped with the minor alterations application, and Ed Gawf (former Downtown Manager) helped coordinate the whole process with them.

The makeover gives a European flair the the former 1920’s facade. The building exterior was painted a soft taupe color and black shutters were installed. Dramatic pink and white striped awnings top new front windows which are lighted from beneath. A new lighted exterior sign was installed and a dramatic new beveled glass front door greets their customers.

They even have created a newly fenced in exterior where they plan to expand their garden offerings come the next spring. Look for more fun expansion in this area when the weather warms up.

Elizabeth’s will celebrate their first anniversary this Saturday, November 16th from 10 am to 6 pm. Come out and see the improvements and enjoy some live music, special treats, and raffles all during the day.