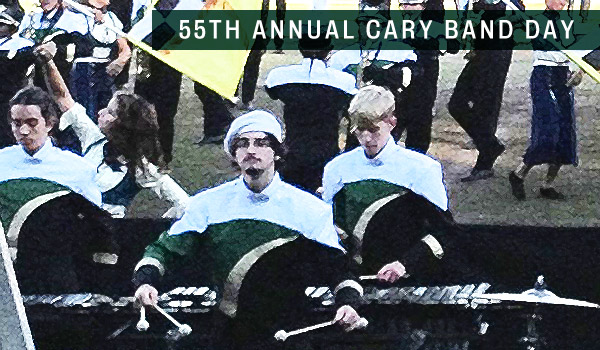 Cary, NC- Cary Band Day was held this year on Saturday, November 2, 2013. This year marked the 55th consecutive year of this exciting community event.The competition took place at Cary High School with bands from throughout North Carolina, Virginia, Tennessee, and South Carolina. This year, it was a beautiful day where thousands of spectators came to view some spectacular marching band shows.

Cary Band Day is one of the longest running band competitions in the US.  The Cary High School Band Boosters and Band day Committee have kept this tradition alive with the support of the Town. The school spirit of the event is supported by the town, and a strong local group of alumni.

Although bands came from as far away as Virginia, it was many of the local bands who claimed the prizes.

Wake County Schools compete mostly in 4A, 5A and 6A classifications which are designated by the overall size of the bands.

In the 4 A class, Middle Creek placed 1st, achieving top scores across all categories, including color guard, drum major, drum line, general and visual effect and all music categories.

5A Top Spot Goes to Butler

The 5A champ was Butler High who beat out Holly Springs and Leesville, placing first in music categories and visual effect as well as drum line.

Panther Creek On Top in 6A

Our local favorites duke it out in 6A,  where three local rivals, Apex, Panther Creek and Green Hope, have the largest bands in the area.

This year Panther Creek won first overall, but Green Hope ranked first for visual effect , which grades the show’s presentation. Panther Creek scored higher for their musical ensemble and in the end, only beat Green Hope by less than a tenth of a point.

Apex, although placing third, won for drum major. Green Hope’s color guard received the highest score of the day with a 94.

The band season is just about over with regional football playoffs taking place beginning this this week. Many bands will travel far in their next rounds of competitions, some as far as Indianapolis.