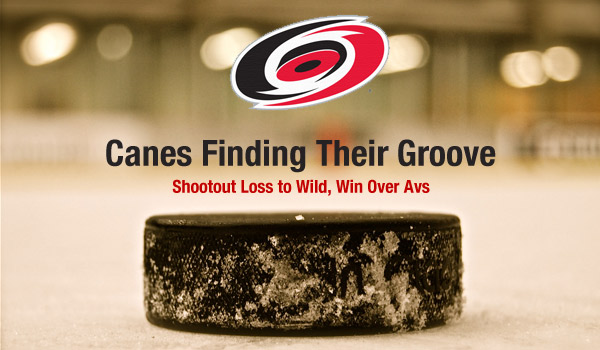 Raleigh, NC — The Carolina Hurricanes have settled in with the current home stand extending their point streak to 4 games, with a shootout loss to the Minnesota Wild and a win over a strong Colorado Avalanche team

The Canes started the first of four consecutive games against strong Western Conference teams on November 9th at the PNC Arena against the Wild.  The Canes lost 3-2, but gained confidence by coming from behind to send the game into OT against a strong team.

Jason Pominville scored early on a head man pass in which Pominville easily converted, high glove side on Justin Peters.

Just a short time later, Drayson Bowman was clearing the Canes defensive zone, saw Ryan Murphy streaking down the right side and made a cross ice pass.  Murphy gathered the puck off the boards, deeked a defenseman at the blue line then sent a knuckler that hit the crossbar and ricocheted into the goal to time the game.

After that goal, the Canes picked up their game in speed, checks, shots, quickness  to cover a free man and pouncing on rebounds.

Around midway in the second, after Murphy put on an impressive skating show, Alex Semin had the puck and put it on Juri Tlusty’s tape from about 60’ away that Tlusty’s put 5 hole for a 2-1 Cane lead.

Less than 3 minutes later the Canes just finished killing a penalty when the Wild scored from a tip in by a completely open Justin Fontaine in the high crease.

The third period was just good hard checking by both teams with everyone being cautious of not making a turnover or penalty.  The shootout was one to forget with all 3 Wild shooters scoring, some looking all too easy.

One twist is the Canes had 2 rookies in the shootout: Riley Nash hit the pipe and Chris Terry scored for the first Canes shootout goal of the year.

Two nights later the Canes hosted Colorado who have not lost a game on the road this year.  That changed when they visited Raleigh as the Canes won an impressive game 2-1.

The Canes still need to have more of the offensive players score more.  The first period was the best the Canes have played this year.  The Avs are a very fast team but in the first period the Canes were faster.  This was the closest to playoff style hockey of the year and it’s highly entertaining and while the attendance was lower than normal, everyone was into the game.

The Hurricanes drew first blood as it was the lucky 7th shot of the period for the Canes when Nathan Gerbe blocked shot was teed up for Jordan Staal who sent a firm backhander in for his third goal of the season.

Very early in the 2nd period, the Canes cleared the puck from their defensive zone up the left side.  Gerbe took possession along the half boards then sent a beautiful saucer pass to Patrick Dwyer who had a stride on 2 defenders for the skillful tip-in.  Speed in hockey is a good thing and Dwyer has speed.

Peters was making some solid NHL saves as he was patient on shot attempts.  On some he looked like a fish just reeled in, flopping all over the ice, ala Dominik Hasek.  As coaches say: anything to keep the puck from crossing the goal line.

Alex Semin did not make the score sheet but was certainly one of the better players on the ice. He has a sneaky-nasty shot that is amazing to see in person. On the shift after the goal, Semin had the puck on the blue line, made a slick pass to Tlusty cutting in the high slot and sent a hard wrister off the pipes but outside of the goal.

The way the Canes were playing and with the chances they were having, could this be the game they broke the 2 goal-a-game average? That answer is no but the 2 goals were enough despite a strong push by the Avalanche in the third period.  The Avs goal came on a powerplay late in the second.  The entire game was tense and exciting but the last 5 minutes with the Avs pouring it on, the Canes dug down deep and showed the West and the rest of the NHL, this team can play with the best of them.

Good news for two of the injured players: Cam Ward and Tim Gleason may be cleared to play within the week.  Jeff Skinner is still a couple of weeks away.