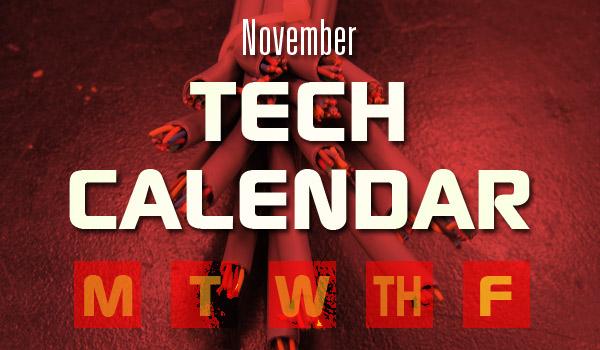 Cary, NC — Ian Henshaw edits the TechTankCalendar. Contact Ian if you have an event you’d like to add.

The November Tech Calendar covers upcoming events in the Triangle and beyond.

Triangle Startup Weekend (TSW) – Friday, November 15, 2013 at 6:00 PM – Sunday, November 17, 2013 at 9:00 PM (EST) in Chapel Hill, NC. This 54-hour event is designed to teach the skills of entrepreneurship by having participants work on a team to convert an idea into an operating business. During the weekend, participants create working startups and are able to collaborate with like-minded individuals outside of their daily networks. All teams hear talks by industry leaders and receive valuable feedback from local entrepreneurs. NOTE, this TSW will be participating in the Startup Weekend Global Startup Battle!

GitHub Training at NC State University – Tuesday, November 19, 2013 from 9:00 AM to 12:00 PM (EST) in Raleigh, NC. Git and GitHub have become indispensable tools for software developers of all backgrounds: industrial software engineers, computer scientists, and students and researchers in any other field in which coding is a key part of your work. In this three-hour workshop, GitHub trainer Tim Berglund will lead you carefully through the basic skills you need to be productive with Git and to collaborate with other developers on GitHub. Learn how to convert an existing project to a Git Repository, track changes to your project, protect your work from experimental changes through branching, push code to repositories on GitHub, and collaborate with colleagues through Pull Requests. Bring a laptop with Git installed and be ready to follow along! We look forward to helping work better together with Git.

WordCamp Raleigh – November 23-24, 2013 in Raleigh. WordCamp Raleigh is a day and a half long event with over 20 sessions spread across three tracks – Users, Power Users and Developers.

Bull City Forward Winter Celebration – Tuesday, December 10, 2013 from 5:30 PM to 7:30 PM (EST) in Durham, NC. Join Bull City Forward on December 10th at the new American Underground on Main to celebrate and support social entrepreneurship in Durham and the Triangle. We will be featuring our inaugural class of Forward Fellows (via mini three minute TEDx style talks!) and the great social impact work they’re doing across sectors from revolutionizing the way we think about food to engaging PTSD combat veterans in entrepreneurial ventures. We will also give you a quick snapshot of what’s been going on in 2013 and what to expect in 2014!

“Software Testing is NOT Dead” – Triangle Information Systems Quality Association (TISQA)2014 Conference and Workshops – March 12 – 13, 2014 in Chapel Hill, NC. Join TISQA for our bi-annual conference and workshop on March 12th and 13th, 2014 at the Friday Center in Chapel Hill, NC. We invite you to participate in the premiere Software Testing conference and workshops of the Carolinas. Come on out and join us for a two day confirmation that testing is alive and kicking!! We will gather to confirm that indeed Software Testing is alive and well and more valuable than ever. The theme for this conference challenges a notion put forth by Dr. James Whittaker that software testing is on its way to being a dead field. There are no zombies at this conference Dr. Whittaker!

GEW Luncheon in Cary This Week
Scroll to top