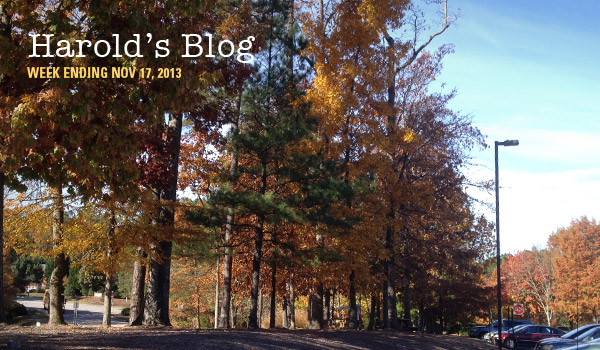 Cary, NC — This week was a very light week for meetings and events. However, I will pay for it next week.

Monday was a town holiday so I only had to work at my “paying job”.

Monday night I met with Mayor Pro-Tem Adcock for dinner to go over a variety of things. It was a good meeting and it is important that we stay in sync on issues.

Wednesday I was notified that I was scheduled to write Cary Matters for December and that the staff needed it ASAP. So I wrote the December episode Wednesday night and turned it in Thursday morning for fact checking and production preparation.

The rest of the week I spent outlining the 2014 State of the Town Address which is due at the first of December.

Saturday I attended a funeral for a church member. She was well loved and several hundred people showed up for her service. What a wonderful life she had and what an impact she made on so many people.

Saturday night I attended a social for about an hour before heading to a dinner meeting.

Sunday night I had the privilege of joining council member Yerha and friends to celebrate his first election victory. It was a good time and a lot of fun.

Emails from staff this week were mostly notifications, invitations, and clarifications on issues.

Emails from citizens this week included questions about champion trees, downtown Wi-Fi, and town athletic programs. I was also contacted by a couple of citizens concerned about the Walnut Street proposals.

This week will be much busier than last week. It includes a Mayors Association outing, a work session, a taping of Cary Matters, a LONG council meeting, and a tree lighting ceremony.

Well that is all for this week. My next post will be on Sunday November 24th. Although I have Facebook and Twitter accounts those are not the best means of communications with me. Please send all Town of Cary questions or comments to Harold.Weinbrecht@townofcary.org and email personal comments to augustanat@mindspring.com.

Thanksgiving Side Dishes with a Twist