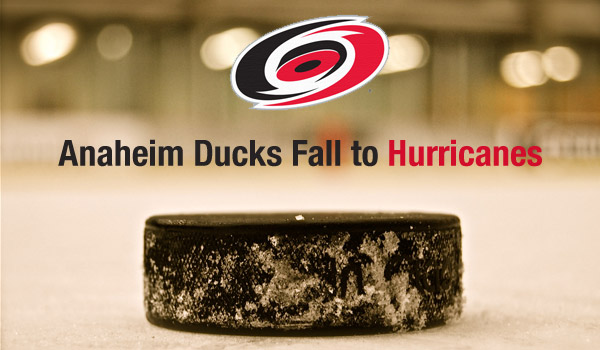 Raleigh, NC — The Carolina Hurricanes ended their longest home stand with a 3-2 shoot out win over the top team in the NHL, the Anaheim Ducks.

The Canes took 9 out of a possible 10 points during their 5 home games keeping them in third place in the Metro division.  Except for Pittsburgh, teams in this division had problems winning earlier in the season but the past few weeks have found the Rangers and Capitals along with the Canes surging to stay in the top 3 for a playoff spot.

The first period of the Ducks’ game had both goalies making impressive saves. Justin Peters had more highlight goals than Victor Fasth.

Peters must have been coached to be patient and wait before committing, as if he had a similar style as Cam Ward. No doubt he’s made great strides since being called up a few weeks ago.

In the second Just Faulk made a rare turnover in his own end that resulted in an easy goal for Corey Perry. Faulk was along the half boards then wanted to clear the puck cross ice but went right on to Ryan Getzlaf’s stick who passed to Perry down low and went short side on Peters that looked too easy compared to the way the game had been played.

Very late in the period, Ryan Murphy, in the exact same place Faulk was on his rare errant clear, made a safe clear up to Alex Semin.  Semin carried the puck from his blue line into the Ducks zone, cut across the ice. With the Ducks appearing mesmerized at his stick handling, not seeing a teammate with a clear shot, Semin launched a laser to the goal.  Eric Staal was in the dirty area of the crease making life miserable for Fasth and the puck grazed his stomach on the way into the goal to tie the game.

Bowman is a Force

Early in the third, Drayson Bowman got a pass from Andrej Sekera and came down hard on the right side.  Bowman beat a defender and cut along the goal line to the crease with Pat Dwyer in front.  Bowman used his speed and strength and stuffed the puck into the net to give the Canes a 2-1 lead.

A few minutes later with Faulk in the box, the Ducks scored on a powerplay.  The Canes won’t like looking at the replay of that goal as they’ll see they had all 4 defenders on one side of the ice leaving skilled Dustin Penner all alone on the right side.  Peters is left out to dry as Penner does a one-time to tie the game.

The overtime period was exciting with both teams having scoring opportunities but no one capitalized sending the game to a shootout.  Coach Kirk Muller again went to the Charlotte Checker connection with Riley Nash and Chris Terry along with Alex Semin.  First Peters stopped ageless Teemu Selanne then Nash had his turn.  Nash beat Fasth but hit the post, the puck hit Fasth in the back and trickled into the net.

Terry had the game on his stick, and came through like a seasoned veteran giving the Canes a rare shootout win.  The win gave the Canes 9 out of a possible 10 points during the home stand.