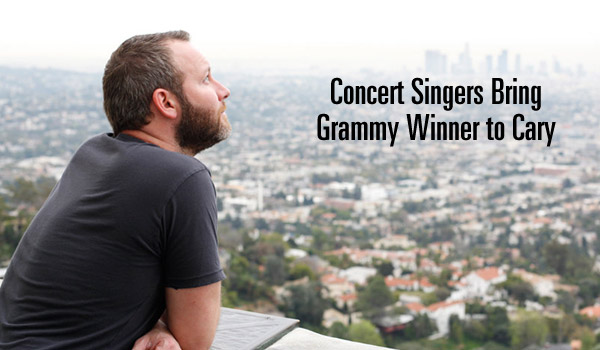 Cary, NC – The Concert Singers of Cary kick off their 2013-2014 season with the third concert in their World Music series. The evening features vocals from 2-time Grammy winner Matt Alber.

Larry Speakman, Artistic Director for the Concert Singers says, “Matt blends extraordinary emotional nuance with impeccable vocal range and style. A past member of the San Francisco-based classical ensemble, Chanticleer, Matt has now turned his attention to contemporary projects. He is widely known for his extraordinary versatility as a performer. The Concert Singers of Cary are thrilled for the opportunity to perform with Alber.”

Alber auditioned in 1998 and won a spot on the Chanticleer elite professional classical men’s ensemble. The 12 men group traveled the world 150 days a year. During his five years with Chanticleer, the group recorded seven albums was a two-time Grammy winner.

Recently, Alber has gone on to record solo projects. His latest album, Constant Crows, debuted at #2 on the iTunes Singer/Songwriter Chart, and explores themes of brotherhood, spirituality, and romance through lushly orchestrated strains of acoustic guitars, piano, organ and strings. The album features two covers – one by Madonna and one by a lesser known 1970’s songstress, Judee Sill.

In his own words Alber says:

Because of my choir teachers, I’d been given a great gift; the ability to find the soul in any brand of music, be it Michael Jackson, medieval opera, shape-note singing, or Gregorian chant.  My harmonic language had been so far stretched through performing and mimicking soul music, styles I was finally immune to musical prejudice.”

YouTube video of Matt performing. This video features Matt Alber singing one of his own contemporary compositions.

The Concert Singers are truly bringing a world-class experience here to Cary, in our own Downtown Cary Arts Center. Try to catch it if you can. Tickets are reasonable and the experience will be truly memorable.

Tickets can be purchased at the box office or online.