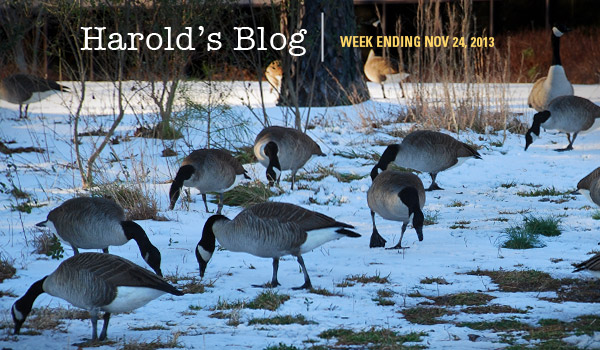 Monday I called all council members in preparation for Thursday’s regularly scheduled council meeting. I wanted to hear of concerns or questions for staff about Thursday’s agenda. I was able to reach all but two council members and there were very few concerns. Later in the day I met with town management, administration, legal, and directors to go over the agenda. The agenda was a long agenda but was fairly straight forward. There were seven public hearings, two of which were expected to draw several speakers due to the volume of emails. One was the proposal for 285 apartments at Morrisville Parkway and Louis Stephens Road and the other was multi-family on Harrison Avenue near Maynard. After our review it was my prediction that the meeting would last about 4 ½ hours.

Monday night I attended a Mayors Association outing and joined the Wake County mayors at a Carolina Hurricanes game. All mayors were present except for the mayors from Fuquay Varina and Knightdale. I was able to use this time to not only socialize with other mayors but to discuss various issues. When I was talking with Mayor McFarlane from Raleigh she jokingly said that Raleigh was working on annexing Cary. I responded that Cary stands for Can’t Annex Raleigh Yet which she hadn’t heard before. And we both had a good laugh. Wake County is blessed to have many good mayors and I am privileged to have the opportunity to work with them.

Tuesday the council held a work session on Transportation System Requirements for development. Council created temporary requirements in January when it eliminated the roads adequate public facilities as a result of case law. In August council held a work session on this Transportation System Requirements and asked staff to research several areas. The purpose of this work session was to provide information and get council direction before staff creates a final recommendation. In our meeting we discussed four main topics:

The next steps in the Transportation System Requirements include: a white paper summarizing the changes to be available sometime in late winter, a stakeholder’s feedback period, a fee rate study, another review with council in late winter, and the eventual change to the Land Development Ordinance which would be summer at the earliest. After the discussion on the Transportation System Requirements the council went into closed session. We adjourned about two hours after we started.

Wednesday I was joined by council member Jack Smith to tape the December episode of Cary Matters. The taping was done all in one take except for my flub at the beginning of the first segment.

Our main topic was the town’s new organizational structure. We also answered questions about areas overpopulated by squirrels, champion trees, and public Wi-Fi. The entire taping took about 30 minutes.

Thursday started with a reception for the Hometown Spirit Award nominees. We were blessed to have 6 great nominees this year. All of who have given of themselves to keep Cary a great place to live. To find out more about what great people these are go tohttp://www.townofcary.org/Departments/Town_Clerk_s_Office/Hometown_Spirit_Award/2013_Nominees.htm.

Thursday night’s council meeting is the only regularly scheduled council meeting in November (because of Thanksgiving) which makes it one of the longest of the year. This meeting was no exception lasting a little over four hours.

There were seven public hearings two of which had several speakers. Speakers expressed concerns over two proposed rezonings: one at Morrisville Carpenter and Louis Stephens Road to allow 285 apartments, and one near Maynard Road and Harrison Avenue which was also proposing multi-family.

In other action council approved additional funding for phase 1 of the downtown park and approved seven replacement members to the Committee for the future.

Friday night I had the privilege of introducing Mr. and Mrs. Clause at the tree lighting event at Waverly Place. I led the crowd in a countdown and Santa threw magic dust and the tree was lit. It was a well-attended event and fun was had by all.

N&O Does It Again

In news this week, there was an article about the tennis director at the Cary Tennis Park. Here is the town manager’s response to questions about that article:

As a little bit of background, the mission of the Tennis Park is three fold: serve the recreational tennis community; provide a top rated training program for serious tennis players; and become a regional and national draw for tennis tournaments. Initially, as the article correctly reported, the Town contracted the operation of the Cary Tennis Park to a private entity.   This highly respected company failed to meet the unique goals envisioned by Town Council for the facility.  As the Town took over the operation of the facility, it was clear that in order to be successful, a hybrid business model which encompassed aspects of both private and public sector operations, was necessary to make the Cary Tennis Park successful.  Very few opportunities exist, if any at all, for this type of incentive arrangement with other Town operations.

Today, the facility is highly successful and achieving Town Council’s goals thanks to our outstanding staff.  I believe the compensation structure in place has played a part in this dramatic turnaround.  Below are some of the facilities achievements:

In conclusion, the employee compensation packages at the Cary Tennis Park are competitive, based on actual results and have been extremely effective in accomplishing the goals for this facility.

Another point about that article that was disappointing was the comparison to a firefighter. It is a sad fact that the heroes amongst us (police officers, firefighters, and teachers) are grossly underpaid. I venture to guess that most salaried people that live in Cary make well above what one of these heroes make. Unfortunately, this is a fact of our society and not as a result of what is going on at the Cary Tennis Park.

The disappointing thing is that the newspaper uses this fact to yank the emotional chain of its readers rather than providing the information and letting the readers decide for themselves.

Staff also sent an email this week regarding the overpopulation of geese which I found interesting:

The Town has been dealing with similar issues at the Koka Booth Amphitheater and the WakeMed Soccer Park with varying levels of success.  Whether we agree with the designation or not, Canadian Geese are classified as migratory birds and are a protected species and are regulated through a complicated process involving the US Department of Agriculture, the US Fish and Wildlife Service and the North Carolina Wildlife Commission.

Canadian Geese are federally protected through a number of treaties with other nations signed at various times in the early part of the 20th century and, subsequently, through the Migratory Bird Treaty Act of 1918. Therefore, management of the geese population for public and private property owners fall under federal regulations.

Under these regulations, management of the geese population requires a “depredation permit” which means there must be property damage before such a permit can be issued.

Another consideration the Town must take into account is the fact that Cary is designated a bird sanctuary in our own ordinances which provide protection for wild birds. This does not mean that we would not take measures, where appropriate, to address any damage created by such birds but only that we must carefully weigh the pros and cons of such issues.

Until the federal government takes action and removes the protections that are established for these birds, the Town (and private property owners) is very limited on what we can do.

The short answer to the geese problem is that they are protected and there are very limited actions we can take.

There was also an email response from staff regarding efficient lighting technologies:

We are lucky that we have a Council with the vision and commitment to have approved and tasked staff with implementing a Strategic Energy Action Plan.

Like you, the Town is no longer purchasing incandescent bulbs.  In fact, lighting retrofits are such a solid business proposition that we are in various stages of upgrading to more efficient fluorescent bulbs, going to T5s in many areas, and looking at LEDs for new interior spaces, and exploring induction lighting for some exterior spaces where it makes sense.  For example, in our parking deck we were able to combine grant funds and incentives from the utility to change to fluorescent lighting and daylight sensors.  This resulted in a substantial reduction in energy use and thereby cost.

The biggest news, though, is regarding our streetlights.  Thanks to a new Duke Energy Progress street lighting rate we be will changing out close to 8,000 streetlights to LED streetlights in the first half of 2014 for a very low up-front cost.  This will represent an over 50% reduction in energy use and hundreds of thousands of dollars in savings each year for the Town.  The payback for the investment is anticipated to be 2 years.  In the SEAP you can see that we intend to develop a new building procedure/policy that will outline the expectation that we on staff will do life cycle cost analyses of energy using items, like lighting, for all new building projects and we will consider other conservation issues like water wise use.

Like the Mayor and Council Member Bush have recommended, we do have a Council-appointed citizen Environmental Advisory Board that encourages visitors.  I am the staff liaison for that group, and as such I’d be happy to talk with you more about it.  Another way to get connected to all of the conservation/sustainability activities in the Town is to “like” our Cary It Green Facebook page.  We are very close to 500 “likes” and would so appreciate the support!

If you see specific examples of the Town not holding to our stewardship commitments in facilities please contact me directly.

We don’t claim to be perfect, but we do work hard every day to hold true to the values of fiscal and environmental stewardship.

I am proud to say that our Sustainability manager and our Environmental Advisory Board continue to look for ways to make us more environmentally friendly and efficient.

This week is a holiday week so I will be writing a little of the State of the Town address but mostly will be spending time with family and friends.

Well that is all for this week. My next post will be on Sunday December 1st. Although I have Facebook and Twitter accounts, those are not the best means of communications with me. Please send all Town of Cary questions or comments to Harold.Weinbrecht@townofcary.org and email personal comments to augustanat@mindspring.com.