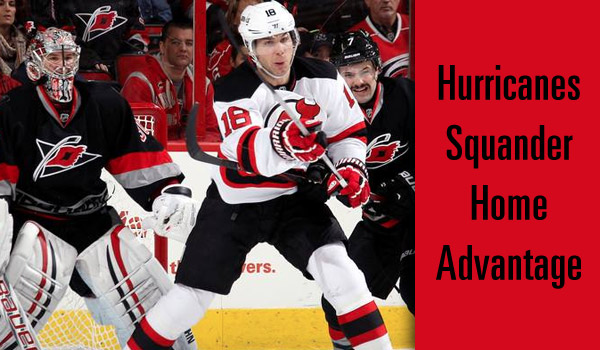 Raleigh, NC — The Carolina Hurricanes lost both games of their recent two-game home stand, 5-2 against the New Jersey Devils on November 29th, and 3-2 against the Vancouver Canucks, on December 1.  Their powerplay is noticeably lacking production starting from control of the puck to taking shots.

Against the Devils, after a weak start in which the Devils scored late in the first period, the Canes came out looking strong in the second.

Jeff Skinner picked up a rebound to the right of Cory Schneider and put away a skilled top shelf shot.  A short while later, Justin Faulk sent a home run pass 150’ to Jordan Staal at the Devils blue line.  Staal caught the pass and went hard and strong to the goal and sent a hard wrister glove side to give the Canes a 2-1 lead.  That goal brought the partisan crowd into the game and the Caniacs were thirsty for more goals from the home team.

The Devils did a good job of frustrating the Canes after the 2 goals and the Canes were only able to get off 8 more shots the rest of the game.

Going into the third period with a lead is usually a good sign for most NHL teams and the Canes have not lost a game this season leading after 2.  Unfortunately that streak quickly came to an end as the Devils raised ‘H-E-Double Hockey Sticks’ by scoring 4 goals on just 11 shots.

Some may say that was a period to forget.  Hopefully the Canes will not forget they blew a lead and learned never to take their foot off the gas. They have to play to win rather than play not to lose.

Just like the Devils’ game, the Hurricanes came out strong in the second and scored 2 goals in a 10 second span in the first minute of play.   Jordan Staal carried the puck into the Canucks’ zone and took a shot from inside the faceoff circle.  The shot was blocked and dropped to the crease area.  Patrick Dwyer was in the dirty area of the crease hacking and whacking keeping the puck alive.  Staal followed his shot, and just like the pregame warm-up drill, jammed the puck in below Eddy Lack’s pads for a 1-1 tie.

Just 10 seconds later, with Ryan Kesler all over him, Eric Staal came in hard and took a one handed shot that Lack barely made a save.  Nathan Gerbe picked up the rebound and somehow got the puck between the pads and the post.

The Caniacs were loud and into the game at this point but the enthusiasm was short lived as just 35 seconds later on a similar play at the other end, Cam Ward made a save then tried to close his pads on the puck but the puck bounced off his a pad into the net just barely over the goal line.

This game could have been a barn burner as Alexander Elder is the player that gave EStaal a scare during the World Championship Games with a knee on knee. Early on it was clear these teams didn’t like one another as there was some chippy play, one led to a major fight between Jay Harrison and designated tough guy, Tom Sestito.  The refs did a credible job dispelling any further incidents as it could have gotten real ugly, real fast.

Bob Fennel is in his third season covering the Carolina Hurricanes for CaryCitizen. Photo from the Hurricanes on Facebook.

Gifts for the Gardener
Scroll to top