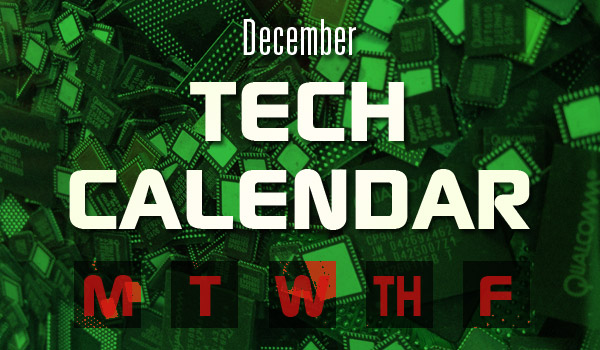 Cary, NC — Ian Henshaw edits the TechTankCalendar. Contact Ian if you have an event you’d like to add.

It may be December, by Triangle Tech Events take no holiday. From cloud-computing to a new co-working space in Cary, a lot is going on for the tech community this month.

CloudCamp Winston-Salem – Thursday, December 5, 2013 from 12:30 PM to 7:30 PM (EST) in Winston-Salem, NC. CloudCamp was formed in order to provide a common ground for the introduction and advancement of cloud computing.

Bull City Forward Winter Celebration – Tuesday, December 10, 2013 from 5:30 PM to 7:30 PM (EST) in Durham, NC. Join Bull City Forward on December 10th at the new American Underground on Main to celebrate and support social entrepreneurship in Durham and the Triangle tech community. We will be featuring our inaugural class of Forward Fellows (via mini three minute TEDx style talks!) and the great social impact work they’re doing across sectors from revolutionizing the way we think about food to engaging PTSD combat veterans in entrepreneurial ventures. We will also give you a quick snapshot of what’s been going on in 2013 and what to expect in 2014!

Oakhaven Co-Working Social – Friday, December 13, 2013 from 5:00 PM to 8:00 PM (EST) in Cary, NC. Join us in Cary as we develop a suburban co-working model in the center of residential areas. Stop by and look at our facility and see if you would like to gain access to our co-working facility. What could be better on a Friday evening than to go to a social with beer, pizza and some interesting like minded entrepreneurial people?

Global Day of Code Retreat – Raleigh/Durham – Saturday, December 14, 2013 from 8:30 AM to 4:30 PM (EST) in Durham, NC. Come one, come all to the 3rd Annual Global Day of Code Retreat – Raleigh/Durham edition! Coderetreat is a day-long, intensive practice event, focusing on the fundamentals of software development and design. By providing developers the opportunity to take part in focused practice away from the pressures of ‘getting things done’, the Coderetreat format has proven itself to be a highly effective means of skill improvement.

Charlotte Startup Weekend – Friday, January 24, 2014 at 6:00 PM – Sunday, January 26, 2014 at 10:00 PM in Charlotte, NC. Details on the Charlotte Startup Weekend Website. Not quite part of the Triangle tech scene, this 54-hour event is designed to teach the skills of entrepreneurship by having participants work on a team to convert an idea into an operating business. During the weekend, participants create working startups and are able to collaborate with like-minded individuals outside of their daily networks. All teams hear talks by industry leaders and receive valuable feedback from local entrepreneurs.

NEXT – February 2014 (Specific details to follow). NEXT is a 3 hour, part-time program for five weeks to build the skills and tactics your startup needs to prepare for an accelerator, investor, or early product launch

“Software Testing is NOT Dead” – Triangle Information Systems Quality Association (TISQA)2014 Conference and Workshops – March 12 – 13, 2014 in Chapel Hill, NC. Join TISQA for our bi-annual conference and workshop on March 12th and 13th, 2014 at the Friday Center in Chapel Hill, NC. We invite you to participate in the premiere Software Testing conference and workshops of the Carolinas. Come on out and join us for a two day confirmation that testing is alive and kicking!! We will gather to confirm that indeed Software Testing is alive and well and more valuable than ever. The theme for this conference challenges a notion put forth by Dr. James Whittaker that software testing is on its way to being a dead field. There are no zombies at this conference Dr. Whittaker!

Gifts for the Gardener

Holiday Spirit: Kindness in a Bag
Scroll to top