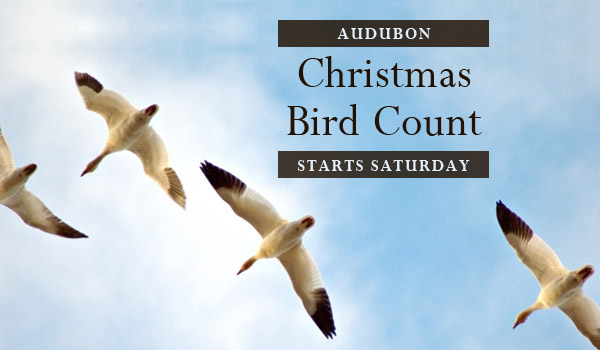 Thousands of volunteer birders, armed with their binoculars, are preparing to fare the blustery winter weather to scour the state’s backroads and byways as they participate in the 114th annual Audubon Christmas Bird Count (CBC), which runs from December 14, 2013 to January 5, 2014.

This early-winter bird census is the longest running Citizen Science survey in the world compiling invaluable bird population data that is used to further protection and conservation efforts of bird species.

Audubon CBC data has spurred tremendous advancements in bird conservation and research throughout the event’s history. Data collected has contributed to hundreds of peer-reviewed scientific studies, informed the U.S. State of the Birds Report and revealed major environmental realizations such as the immediate impacts of Climate Change.

Beyond serving as the catalyst for conservation action, it reveals success stories. North Carolina’s Audubon CBC helped document the comeback of the previously endangered Bald Eagle, and significant increases in waterfowl populations, both the result of the state’s conservation efforts.

“Because of the CBC’s rich history of citizen science and volunteer participation, scientists have 114 years of detailed records to reference when determining and identifying changes in habitat, populations, reactions to climate change, and much more,” said Curtis Smalling, Director of Land Bird Conservation for Audubon North Carolina. “The strides we’ve made in the conservation and protection of birds and their habitats in North Carolina are a direct reflection of the significant data collected, and the amazing participation we continue to see from our volunteers.”

North Carolina’s birding circles are some of the top performing in the country year after year. During last year’s count 890,396 birds from 232 different species were reported.

Fifty-two counts are scheduled throughout North Carolina during the 2013-2014 Season, covering the entire state, from the Highlands Plateau in far western North Carolina to Bodie-Pea Island on the Outer Banks.

To participate in a circle in your area contact your local Audubon chapter – http://nc.audubon.org/audubon-locations.

Many of the count circles include public lands such as state parks, national wildlife refuges and national seashores, as well as Audubon Important Bird Areas. An interactive map of count circles throughout North and South Carolina can be found on the Carolina Bird Club.

During this year’s count period, an estimated 70,000 people in the United States, Canada and many countries in the Western Hemisphere will identify and count all the birds they see during a 24-hour period, and last year’s international count shattered records. A total of 2,369 counts and 71,531 people tallied over 60 million birds of 2,296 different species.

Counts took place in all 50 states, all Canadian provinces, and more than 100 count circles in Latin America, the Caribbean and the Pacific Islands.

Three new counts were even welcomed in Cuba, where for the first time ever the tiniest bird in the world, the Bee Hummingbird, was recorded in CBC results.

“Audubon was a social network before the world ever heard the term,” said Audubon President and CEO David Yarnold (@david_yarnold). “Each December the buzz from our social network goes up a few decibels, as people with the knowledge and the passion for birds provide what no organization alone can. The Audubon Christmas Bird Count harnesses volunteer power to gather knowledge that shapes conservation policy at enormous scales in this country. I couldn’t be prouder of the volunteers who contribute each year.”

An Alternative to Shooting the Birds

The Audubon Christmas Bird Count began in 1900 when Dr. Frank Chapman, founder of Bird-Lore – which evolved into Audubon magazine – suggested an alternative to the holiday “side hunt,” in which teams competed to see who could shoot the most birds.

The Audubon CBC is a citizen science project organized by the National Audubon Society. For more information and to find a count near you visit http://birds.audubon.org/get-involved-christmas-bird-count.

Follow the count on social media with hashtag #AudubonCBC.

Downtown Festivities, Despite the Weather