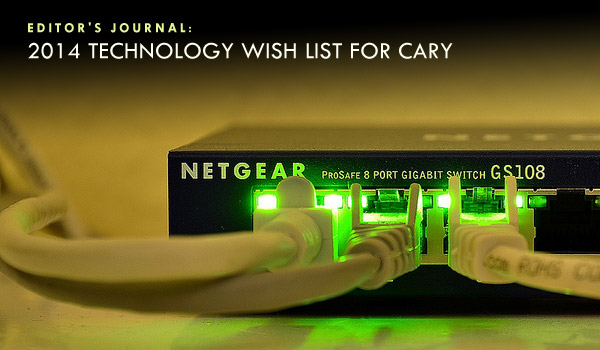 Cary, NC — What’s on the top of my 2014 Technology Wish List for Cary? Gig U, ultra-high speed broadband for a 7-county area of the Triangle including Cary, is my #1 item.

Looking ahead to 2014, what are the biggest technology opportunities for Cary?

Gig U is a project of Blair Levin, a former FCC Commissioner for Broadband, Raleigh attorney and Fellow at the Aspen Institute. Duke, NC State and UNC as well as many of the communities in the Triangle (including Cary) are on board. The U.S. has fallen to 15th on the worldwide list of download speeds by nation (South Korea leads with a bit rate 15x the U.S. average).

The good news: towns that have developed ultra-fast networks, including Kansas City and Chattanooga, TN, have seen a big influx of high tech business. The Triangle would be the largest region in the nation with ultra-fast broadband. In some cases, fiber already exists. Gig U estimates it would take two years to deploy gigabit internet across the region.

While this is not a Cary initiative per se, staff has done good work in this area and we should collectively push this item to the top of our 2014 Technology Wish List.

My Cary tech friends all had suggestions about improving the Town’s presence on the web. I know Council and staff have a new website on their radar, but have been constrained by other budgetary demands during challenging economic times.

Let’s make 2014 the year we tackle a new Town website. My correspondents encouraged our civic leaders to think outside the box, including a preference for open source platforms. Many mentioned developing a mobile strategy including responsive web design and a small family of helpful apps. “How about a Cary Art mobile app?” Lori Bush suggested.

Open Data can be explained in a nutshell as:

The community has made some progress in the last year. In Cary, a hugely successful Open Data Day was organized by Technology Tank with the help and support of the Cary Chamber and Town staff. Across the region, Raleigh, Durham and even Morrisville have made steps toward modernizing data systems.

Open Data saves time and money while increasing transparency. As well, third-parties like Triangle Code for America brigades can build useful apps from streams of info, like the popular mashup of Crime Data with a Google Map. But that data has to be published online to be usable.

Ian Cillay, the founder of Triangle Open Data Day, emailed about the difficulty of buying a ticket online for a show at Cary Arts Center. “If it was possible to build a search tool that let a user search by location + age + duration + time-of-day + price, just maybe someone would build [an app for] it.”

In 2014, I hope Town Council recognizes the importance of Open Data. The age of the PDF is over.

My correspondents had other ideas at the top of their lists including more tech programs from Parks & Rec, carbon monoxide sensors on police cars and public wi-fi in Town parks.

Then the conversation veered off to tech toys. Here’s what some of Cary’s nerdiest have on their personal 2014 Technology Wish List:

Cary, NC is a tech community. But that doesn’t make us a tech Town. Maybe 2014 is the year we close the gap.

It’s not for lack of will – it’s lack of resources. Let’s make some bold moves in the tech space like we have on infrastructure.

CaryCitizen is sponsored in part by Hopewell Academy in Cary, serving grades 5 – 12.