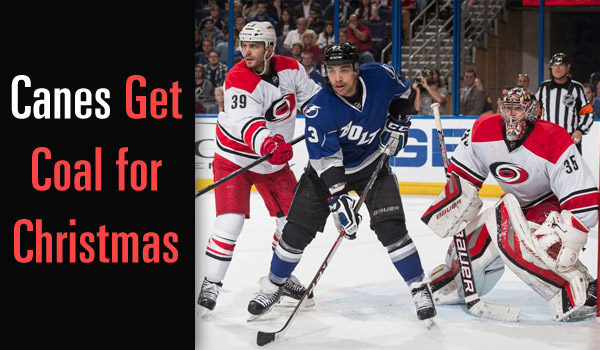 Raleigh, NC — The Carolina Hurricanes lost three in a row over Christmas, 2 at home and an OT loss away.

After an unusually long 5 day break, the Canes were on the losing side of a game against the Washington Capitals, 4-2 on December 20 at the PNC Center.

The game changer was the Caps powerplay as the #1 PP team in the NHL put in 3 PP goals in the second period.

The Canes were the better 5-on-5 team as the Canes were pressuring on offense and tight checking on defense all night.  Jordan Staal scored the lone goal of the first.  Justin Faulk made a crisp clearing pass to Alex Semin in center ice.  Semin cleverly tipped the puck up to JStaal in full speed, who went far side to surprise goalie Philipp Grubauer.

The second period was all powerplay goals, 3 by the Caps and one by Riley Nash, for the Canes. NHL goal leader Alex Ovechkin scored his 400th career goal in an empty net to seal the game.

The Canes played Tampa Bay Saturday with Justin Peters playing one of the best games in his career with 47 saves on 50 shots.

Juri Tlusty opened the scoring early in the first on a nice shot from the high point. Patrick Dwyer carried the puck into the Bolts zone near the boards then left a nice drop pass to Tlusty who cut to the center then sent a wrister off the pipes into the net.

Tlusty scored his first career short handed goal in the second on a nice pass from Eric Staal to put the Canes up 2-1.

Future Hall of Famer Martin St. Louis scored a powerplay goal in the third to tie the game sending it into overtime.

After what looked like an obvious boarding infraction on Jeff Skinner, Radko Gudas took the puck the entire length of the ice and beat Peters high glove side for the 3-2 OT Cap win.

Jackets Steal One From Canes

The Canes have not won against the Jackets since 2005 and after the action in the game as well as the Jackets and Canes now in the same division, future games should be very exciting. Peters got the start after playing lights-out in his last game.

The Jackets scored early after a dump in that caught the Canes flat footed. Peters hesitated on going out of the crease to clear the puck and the Canes defense was slow getting to the puck allowing a nice feed to the clot for a one timer past Peters.

Late in the period, after a faceoff win by EStaal, the puck bounced off the linesman leg to Skinner.  Skins took the puck to the high slot with Tuomo Ruutu going to the dirty area of the crease for a great screen. Skins threaded a low wrister into the net to tie the game 1-1.

In the second, Peters made a high chest save but couldn’t control the rebound. Corey Tropp crashed the net and got credited with the goal after it bounced off what appeared his skate. About a minute later the Canes were on the powerplay again. In the span of 2 seconds, Jordan Staal won a faceoff back to Alex Semin, Semin passed to Skinner who sent a laser into the net to tie the game.

Midway in the third Nathan Gerbe sent a nice pass to JStaal who entered the Jackets zone.  Staal took the puck deep, patiently waited then sent a beautiful pass to Semin in the sweet spot of the slot for a one timer that gave the Canes a 3-2 lead.  The Canes got shocked as the Jackets capitalized on 2 Cane errors.  The first was a turnover near the Canes blue line, the second was a poor line change.  The Canes had a chance to send the game into overtime as Skinner almost had his second career hat trick but the puck hit the shinny part of the goalie stick’s shaft to seal the Jackets’ win.

So the Canes are getting coal in their stockings. But off the ice, several Canes made dozens of children happy as they visited hospitals with some children that need anything to help them feel better. For that alone, Santa will make sure all the Canes and Caniacs have a great Holiday season.