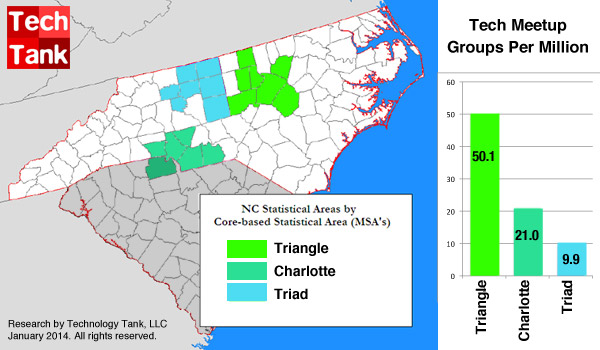 Story and research by Ian Henshaw

Our analysis of Tech Meetup Group Density shows a large difference between the major population centers in North Carolina. The density of Tech meetup groups could be a useful indicator about the number of people in an area that are active in Tech fields and may be useful for companies looking to locate Tech labs or Tech related facilities.

For population we went to the Wikipedia page for North Carolina Statistical Areas. The population numbers are as of July 1, 2011, as estimated by the United States Census Bureau, and the Core-based Statistical Areas are defined per the United States Office of Management and Budget. For the Triangle, we combined the MSA’s for Raleigh-Cary and Durham. For the Triad, we combined the MSA’s for Greensboro-High Point and Winston-Salem. The population data is not exhaustively collected and we used the Wikipedia summary page for convenience rather than rigor, but we feel that the numbers provide a good basis for our evaluation.

The number of Tech Meetup Groups is developed by a review of all groups on Meetup.com within 50 miles of a City. We selected the groups that we feel are Tech based and also included a few others that we are aware of that do not use Meetup.com. Our experience is that Tech groups list their meetings on Meetup.com since this is where Techies look for interesting meetings to attend. Chapters of possibly Tech related trade organizations do not appear in the numbers.

We are interested in what you think about this analysis or if we are missing out on a number of Tech meetup groups (eg. maybe an area uses something other than Meetup.com?). Leave your comments below or contact Ian Henshaw directly.

Ian Henshaw is Managing Partner for Technology Tank and a regular columnist for CaryCitizen.

Will Your Child Be Ready For School?