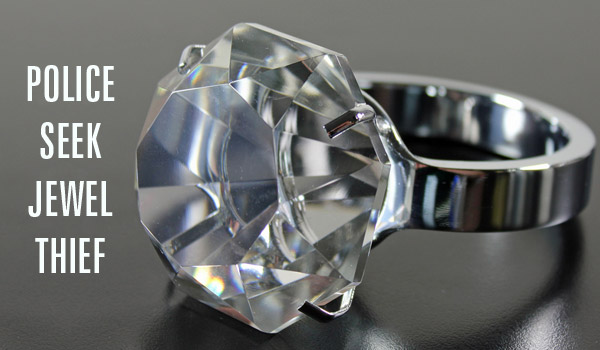 The Town of Cary Police Department is still searching for leads for the ring robber who ran out of Joint Venture Jewelry with the diamond he was “viewing” on December 28. Multiple employees and customers were in the store at the time; no injuries were reported and no weapons were shown.

The suspect is a heavy-built white male last seen wearing a white long-sleeved shirt, black pants with an emblem on the pocket, and a Duke University baseball cap; he had tattoos on both hands. He left the scene in a dark, four-door car.

“After exhausting all leads, we’re hoping citizens can help solve this case and return thousands of dollars worth of property back to the showroom,” said Capt. Don Hamilton of the Town of Cary’s Criminal Investigations Unit.

Here’s the description of the robbery as told to CaryCitizen by owner Donna Hankin:

At around 2:30pm on Saturday December 28th, a tall, broad, white, muscular-built, southern man with a disfigured thumb and tattoos with dates and names on the backs of his hands, came into our store with a mixed-race, petite women, shopping for an engagement ring. After finding a few options he whispered to Karly that he would be back in about 2 hours after ditching his “girlfriend” to purchase a ring solo.

At around 4pm that same day the man returned. This time he worked with Lee. He settled on a $21,000 diamond solitaire engagement ring in white gold. Lee was explaining all the specks to him as he asked to see the ring once more. Upon taking the ring back into his hand to study it, he took a deep breath, exhaled and bolted out of our store, with our ring in hand. He had a dark, 4-door car, already running and waiting for him to jump in. And he was gone.

Anyone with information is encouraged to contact the Town of Cary Police Department at (919) 469-4012 or Cary Crime Stoppers at (919) 226-CRIM(E). Crime Stoppers pays up to $2,500 for information leading to the arrest or indictment of those responsible for committing certain types of crimes. All calls will be kept CONFIDENTIAL at caller’s request.