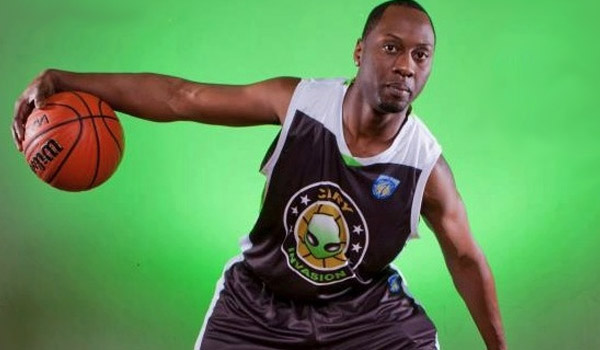 They will play arch rival Wilmington Seadawgs. Our hometown boys are part of the Tobacco Road League and play all of their games in Cary’s Downtown Herb Young Community Center. Their high energy play has thrilled crowds as they sit on the side lines, just a few feet from the action.

The Invasion has a new coach this year, Ernesto Hatchet.  Hatchette comes to the Invasion highly recommended by former Invasion coach Marquis Johnson. His most recent experience is three years as the assistant coach at St Augustine. Prior to that, Hachett coached basketball at phenom high school Word of God in Raleigh, alma mater of NBA star John Wall.

Sole Proprietor Terry “Doc” Thorne says the new uniforms say “Cary” with pride as the only area sports team to have the town name displayed. Doc is new to the team as well, as founder Mark Janus recently left the franchise, with Doc taking over the reins.

Charles Ward, the franchise player, is back with his engaging fast style of play. His size is impressive, yet off the court said to be a really nice guy. This is his third year with the team, having been recruited from the beginning. Brandon Hickson, Chris Poole and Sylvester “Sly” Brookes will also start their third years with the team.

Other players to round out the team: Mike Smith, Freddie Little, Daniel Jackson, Anton Currie, Raheem Oshodi,  and Paul Wright. All have played for ACC or CICC college teams in the past.

The season opener is against Wilmington on January 18. And don’t miss the re-match between our own men in blue, the Cary Police Department as they take on the pros on Feb 1. All proceeds from this game will go to benefit the Dorcas Ministries.