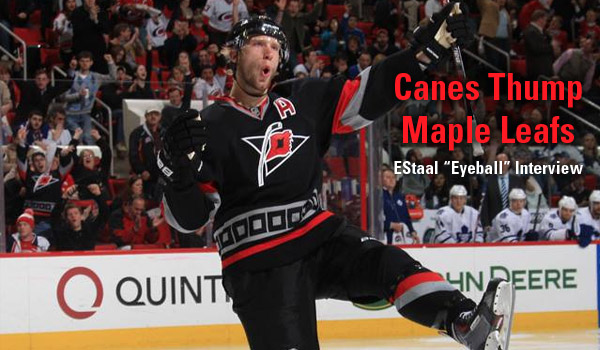 Raleigh, NC — The Carolina Hurricanes beat the Toronto Maple Leafs 6-1 on Friday, January 10, 2014 at the PNC Arena.  It was the first time this season the Canes have scored 6 goals and played a nearly perfect game in every category.

Zach Boychuk opened the scoring early in the first period.  Elias Lindholm sent the puck deep with Brett Sutter taking a quick turnaround one hander. Leaf goalie James Reimer made the save but sent the rebound in the sweet spot of the slot.  Boychuk had a step on his defender, settled the puck and sent a hard back hander stick side into the net.

A few minutes later the Canes had their best looking power play this season.  The passing was crisp, fast and on the tape of every stick. Alex Semin and Lindhold were playing catch almost mesmerizing the Leafs.  Lindholm then centered to Jordan Staal for a quick shot. Reimer made the save but Jeff Skinner was there for the rebound and sent a wrister in with authority to continue his amazing scoring streak.

Patrick Dwyer completed the Canes scoring in the first on a wrist shot after a JStaal shot was blocked in front.

The newest Cane, John Michael Liles scored not only his first goal of the season but it was against his former team.

Boychuk carried the puck down on the left wing, used Sutter as a decoy, then sent a cross ice pass to Liles who sent a wrister far side.  Eric Staal is injured and was sitting behind me up on press row.

Knowing it was Liles scoring and what it must have meant to him and the team, right after the goal I turned to Staal to make eye contact. Staal did look over to me and I raised my eyebrows and nodded my head.  Staal gave a big smile and opened his eyes wide and also nodded acknowledging the accomplishment of Liles.

Early in the third with Skinner in the penalty box finishing his tripping penalty from late in the second, the Canes increased their league leading short handed goal total to 8, when JStaal stole the puck at his own blue line then carried the puck up ice sending a laser short side that froze Reimer.

Lindholm ended the scoring late in the game on another powerplay goal.  JStaal tipped the puck to Skinner, with Skinner sending a slap shot wide.  The rebound came out in front of the goal right to Lindholm’s stick who had 24 square feet of goal to slide the puck in for his first three point game.

Great game for the hometown boys and continued the win streak to 5 games.

Since this game, the Canes have dropped 3 to Calgary, the Flames and the Blue Jackets. Now you’re up to date. Bob Fennel will return with another Canes story next week.