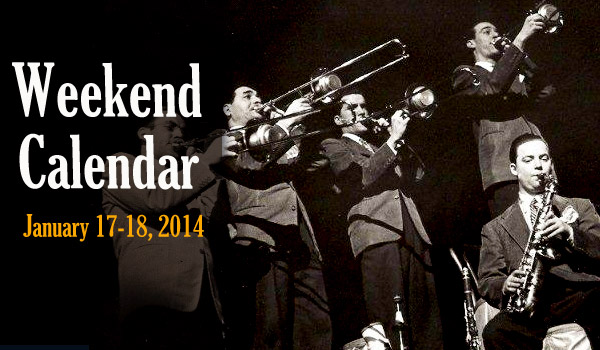 Cary, NC — The Glenn Miller Orchestra is going to be in town this weekend. The Lounge Doctors are, too, plus several other interesting weekend events.

Miller burst across the scene like a shooting star, commanding the music scene from 1938 until his mysterious death in 1944. From GlennMillerOrchestra.com:

In the Fall of 1944, the band was scheduled to be sent on a six-week tour of Europe and would be stationed in Paris during that time. Miller decided to go ahead, in order to make the proper arrangements for the group’s arrival. And so, on December 15th, Glenn Miller boarded a transport plane to Paris, never to be seen again.

The current Glenn Miller Orchestra line-up started in 1956 and plays about 300 shows around the world every year. This weekend, they’re coming to Cary.

Also Friday, January 17, 2014, the Julia Price Quintet will be at UnVined in downtown Cary.

And, the Lounge Doctors will be making their debut at Doherty’s at the corner of Davis and High House.

See for yourself what else is happening Friday on the Calendar.

On Saturday, January 18, 2014, the Cary Invasion kicks off the Tobacco Road Basketball League with a game against the Wilmington Sea Dawgs at Herb Young Community Center in Cary.

The Invasion has a new look, a new coach and a new owner.

It’s the middle of January – no big street festivals or road races to report. But this is Cary, so check the Calendar and get out of the house and enjoy yourself.

The Dunk Heard Round the World