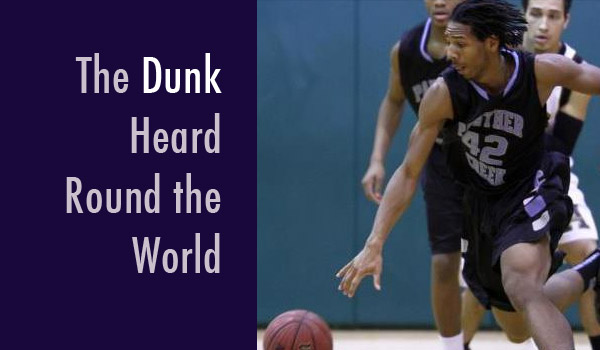 Cary, NC — Panther Creek Senior Nubian Spann had never dunked in a game before Friday night. His first official jam made it onto ESPN’s Top 10.

The Dunk Heard Round the World

The dunk itself was pretty spectacular – Spann reaches out and grabs an alley-oop from guard Juan Munoz, stuffing it into the basket with one smooth motion.

It’s what happened in the next second that caught everyone’s attention – the glass backboard exploded into a million pieces. It was like a flashback to Charles Barkley or Shaquille O’Neill.

The game between PCHS and Apex was postponed until a new backboard could be arranged.

A cell phone video caught the moment and made it onto ESPN’s Top 10. Clips on YouTube had garnered more than 100,000 views. The best clip is from MaxPreps:

The media is making out like this is some ancient high school facility. A commenter on YouTube said:

It’s not a old backboard, I go to PCHS as a freshman, and lol the backboard got replaced 1-2 years ago

According to ESPN Sportscenter, the backboard-shattering jam was Spann’s first game-time dunk:

The story was also picked up by CBS Sports, the Huffington Post and others.

Currently, Panther Creek Men’s Basketball (because you can’t call it boys when they start shattering the backboard) leads Conference 13 in the NCHSAA standing with a record of 4-0. Apex is tied for first with an identical record.

Next up for Nubian Spann: finish the game against Apex.