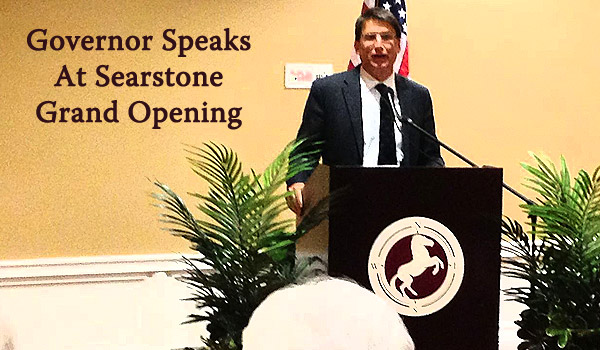 Cary, NC — North Carolina Governor Pat McCrory gave the keynote speech at the official grand opening for Searstone Continuing Cary Retirement Community (CCRC) on Thursday January 16, 2014 in Cary.Barbara Gibbs, anchorwoman for WTVD, was the MC for the evening, first introducing Executive Director Chris Romick to make opening remarks. He stated the obvious to those in attendance that “many of these folks (residents) have been waiting for this for 9 years”.  He referred to the delays in construction after initial Cary Town Council approval in 2007.

The recession took its toll, not only on the housing market here and around the nation, but in senior living projects.  Continuing Care residences ask for an up-front down payment, which means many seniors must first sell their existing homes to make the move. Searstone was also required to have at least 75% of the units sold before construction could begin. In 2008-2010 the land stood vacant and earth started to really move in 2011.

Now, with the market improving, the center has filled quickly. The community has just about finished construction on the first phase of development with 169 units that can house approximately 300 residents. 90% of the these units have already been pre-sold.

According to Stan Brading, President for Searstone board of directors, the project is ahead of schedule. Ninety units have been moved in to date, and original projections had forecast only 45.

As part of their board directives, 5% of revenues from the operation of Searstone will be donated every year to Lutheran Services and used in helping senior’s needs right here in Wake County. Thursday, Brading presented a $21,000 check to Lutheran Services for 2 months worth of operation. 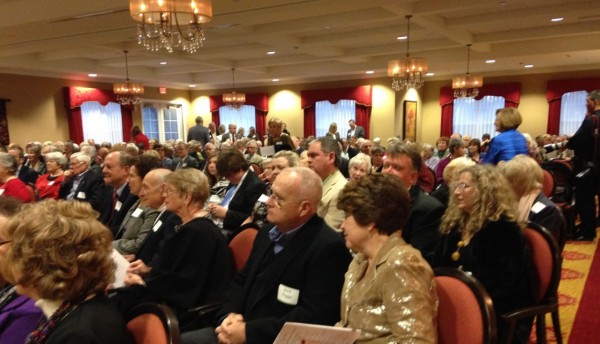 A packed room awaited the keynote speaker, Governor Pat McCrory who was a little late arriving. He stumped a bit for his Republican platform, focusing on issues that would appeal to the crowd: The repeal in North Carolina of the estate tax. He went on to ask how many in the room had moved to Cary because they had children of grandchildren already living here. A significant number raised their hands

The Governor was quick to point out that North Carolina once had the 5th highest unemployment rate in the nation at 9.4%. However, recent economic reports have shaved 2% percentage points taking North Carolina out of the top 25 states in unemployment. The largest decrease in the country.  He credited his administrations lowering of the income tax, and ending unemployment benefits as tough but needed decisions to get people motivated to get back to work.

Another subject he touted and a message heard loud and clear by the seniors in the room, was for residents to be engaged in their communities. He encouraged the seniors in the room to “Volunteer, or run for office,contact their town council” calling it “living here with a purpose”.  He added, “Their years of wisdom and maturity are what is needed now in these tough times. ” McCrory went on to say that “we should leave this place a better place then when we arrived”

Bill Sears, the architect behind the Searstone and whose land the project is built upon, took the podium last and was choked up as he began stating that “(he) thought this was going to be easy.”  He went on to describe what an honor it was to have the Governor in attendance and that “Governor, I can’t tell you how special you’ve made this occasion for me and these people” It turns out there’s a true connection between Sears and McCrory, as it was Sears who conducted the renovations recently on the Governor’s Mansion. 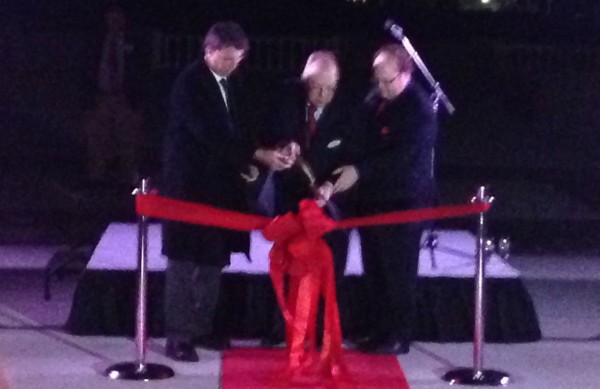 The crowd gathered in the cold as Governor McCrory, Bill Sears and Wayne Goodwin, NC Department Insurance commissioner, got out the giant Chamber of Commerce scissors to conduct the ribbon cutting. With glasses of champagne held high the crowd gave a toast to all the hard work that preceded the event, and to the new chapter this newest kind of retirement community brings to Cary, North Carolina. 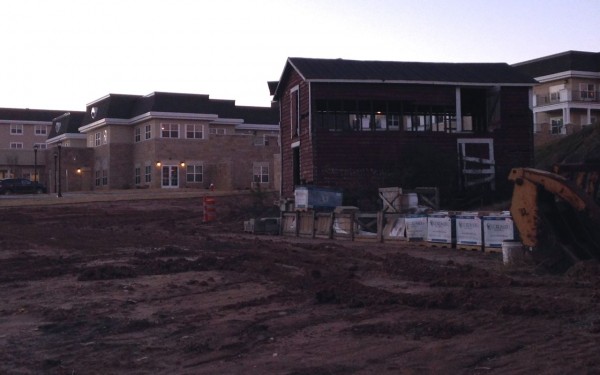 the old red barn is still on the Searstone Property, just moved towards the back