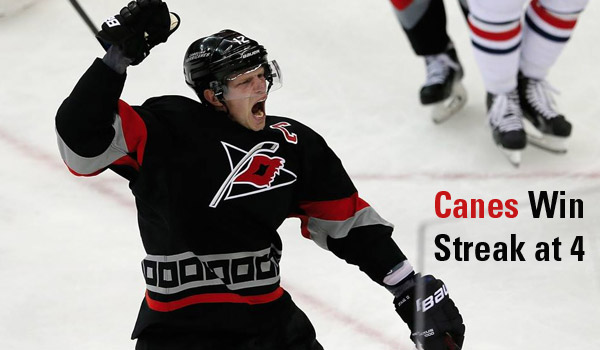 Raleigh, NC — The Carolina Hurricanes extended their win streak to 4 games first with an impressive 6-3 win against the Ottawa Senators on January 25, 2014, then again on Monday January 27 against the Columbus Blue Jackets. On the road earlier in the week, the Canes beat the Flyers, 3-2  and the Buffalo Sabres 5-3.

Weather problems in Philadelphia forced Tuesday’s game to be played on Wednesday. The Sabres game was on Thursday, so with the NHL rules of not playing games 3 days in a row, Friday’s game against the Senators was moved to Saturday for a rare noon time start.

Nathan Gerbe opened the scoring midway in the first on a wraparound that bounced in off goalie Robin Lehner’s right skate.

Fans that like scoring had to love the second period with a total of 7 goals being scored.

Alexander Semin made a beautiful flip pass up to Eric Staal at the red line the neutral zone.  Staal out skated the defender and sent  a wrister five hole for a 2-0 Cane lead.  Just 32 seconds later, Gerbe entered the zone with speed on the left wing then sent a pretty saucer pass to Manny Maholtra in the slot.  Maholtra timed the pass perfectly and had great eye hand coordination to swipe the puck into the net frustrating both the defender and goalie.

Riley Nash got the next Cane goal on a wrist shot form 15 ‘ out but it was the Andrej Sekera show that set up the goal.  Sekera stick handled the puck for about a minute circling the entire Sen zone then sent a cross ice pass to Nash for the score.

Tuomo Ruutu scored a powerplay goal on a slick wrist shot that seemed to freeze Lehner‘s reaction time.  Ottawa put in 3 goals in the period to stay in the game.

Maholtra ended the scoring late in the game on an empty netter.  With the win, the Canes are back in the playoff race setting up a huge home game Monday against Columbus.

The Canes extended their second best win streak of the season to 4 games with a fantastic come from behind 3-2 victory against the Columbus Blue Jackets on Monday night.

The Jackets have had the Canes number for years and it looked like their 10 year dominance would continue until the Staal brothers dominated in the third period.

The Canes came out flat and looked like the 4th game in 6 days was catching up with them.

The Jackets got 2 quick goals in a 17 second span and that completely took the crowd out of the game for the rest of the first period. The Canes, like all pro hockey teams, feed off fans’ energy, and after the first intermission and the shock factor subsided, the fans started getting back in the game.

The Canes play in the second period was everything the Caniacs and coaches could ask for except for the scoring.  The Canes had jump, skated hard, fore checked well and took shot after shot.

While Jeff Skinner got credit for 4 shots on goal, he had to take at least 9.  Some were blocked, some were deflected and some were off the mark but he was in a zone.

The third period was all Staals.

First Eric Staal got a nifty drop pass from Alex Semin then went five hole to get the Canes on the boards, closing the gap to 2-1.

Just a minute later, EStaal won a faceoff and the puck went down low. Juri Tlusty out muscled his defender and sent a crisp pass to EStaal in front of the crease.  Staal flipped the puck into the upper right corner to tie the game with the Caniacs’ responding with the loudest response of the season.

Next up: Jordan Staal. To keep it all in the family, less than 2 minutes later, Skinner dropped a pass to JStaal charging up the left wing.  Staal entered the zone, cut to the center with a nice toe drag then sent a shovel shot off the right post into the net just has he was being checked.  He watched the puck go into the net while on his back and let out a roar of victory that was echoed by the crowd.

The Canes didn’t sit on the lead and both teams fought hard to the final buzzer knowing the importance of this game.  Not quite playoff atmosphere but certainly getting there on game intensity and Caniac loudness.