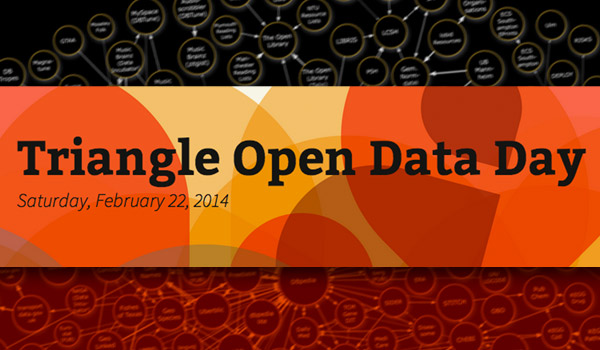 The first Triangle celebration of International Open Data Day was at the Cary Chamber on February 23, 2013. Technology Tank, the organizers, hoped to attract 6-12 people for a day of civic hacking. Over 100 people registered.

In 2014, Tech Tank has moved the venue to NC State College of Engineering. Since registration opened a couple of weeks ago, over 120 people have signed up.

But what is Open Data Day? From TODD:

Open Data is about the free flow of information.  It can be information as mundane as water usage or as transformative as government records.

Track 1 is a series of workshops on Saturday, February 22, 2014. It is geared toward the general public and anyone with an interest in the burgeoning Open Data movement in the Triangle. Topics may include:

Registration is open for TODD Track 1.

Programmers, data analysts, web developers, public officials and students may all be interested in Track 2.

Participants pitch ideas, form groups and try to complete at least a prototype of their application by the end of the weekend. Track 2 runs Saturday and Sunday, Feb 22-23, 2014.

Registration is open for TODD Track 2.

Uniting the Triangle through open data is everyone’s business. It goes to economic opportunity, government transparency and quality of life.

Tech coverage on CaryCitizen is sponsored in part by Waverly Place.